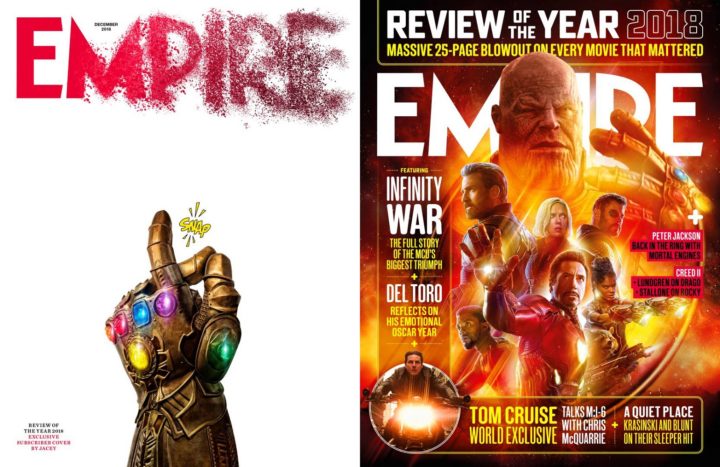 As 2018 slowly comes to an end, Empire’s December 2018 issue looms with much anticipation. As is traditional, Empire’s annual review of the year will be released with this edition, and it’s no surprise that Avengers: Infinity War fills the top rank by a large margin. There are two covers for this issue, one for subscribers (a special edition of sorts), and another for the non-subscribers to purchase off the shelf. As the theme suggests, Empire looks back on the films that defined 2018. The subscriber’s cover has been designed by prolific digital illustrator, Jacey, known for his iconic combination of photography and illustration using digital means. The cover image is unmistakably that of Thanos’s Infinity Gauntlet, with the six Infinity Stones attached. A homage to the film, with the Empire masthead tuning to ash, much like many the key characters at the end of the film, the image is poetically complimented by the phrase “snap!” in typical comic-book fashion. The non-subscriber’s edition is impressive, too, with Thanos, Captain America, Iron Man, Black Panther, Thor, Black Widow and Shuri all depicted on the cover, emulating the photomontage style of the original Star Wars films, which has come to be a common feature on many Empire covers. 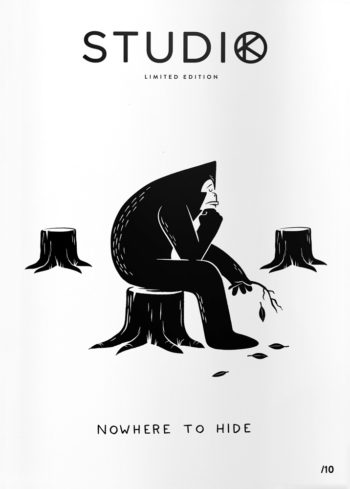 Nowhere to Hide (NtH) is self-initiated zine published by Studio Kronk. The theme of this passion project covers the relationship between man and nature, particularly the reckless and ignorant way that we tend to treat nature. Blind over-consumption and shallow materialist desires are at the core of the destruction of the environment, and the impact that humankind has is clear to see, yet not much is being done to remedy the situation. NtH explores the lives of the creatures living in nature, all unsuspecting victims of humanity’s obsession with oblivion. Produced entirely in black and white, this is the first zine that Studio Kronk has published, showcasing the work of Kronk, Pamela Potgieter, and “young gun”, Gavin Morison. An extremely limited edition of 10 signed copies exist, but Studio Kronk is busy financing an open edition which will be released soon. 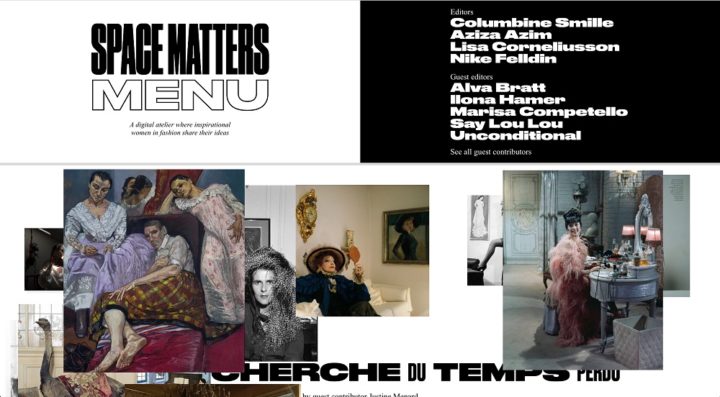 Space Matters is an interactive, online style library of sorts, a digital atelier where influential women in fashion share their ideas. An inventive source of inspiration, women in fashion are invited to guest-edit and personally curate their own posts. As a result, Space Matters has crafted a network that has allowed several important female voices in fashion to be more accessible to the world, fostering fruitful creative relationships which have developed into a kind of international sisterhood. At worst, it’s an unconventional space that brings people and ideas together — the site is playful and accessible. Even if fashion isn’t of interest, the site’s been designed to maintain a pleasant experience. 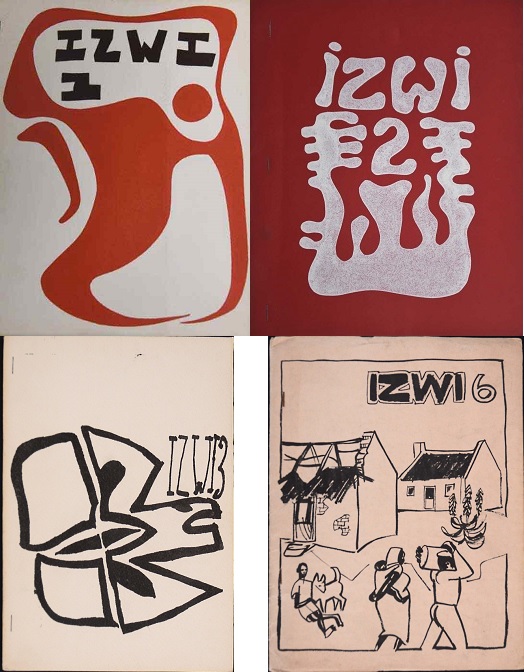 In last week’s column, WURM, an experimental South African publication edited by Phil du Plessis was highlighted, particularly for its quasi-avant-garde tendencies. Izwi, also known as “Stem” or “Voice”, was du Plessis’ answer to the vacuum that was left behind after WURM found its demise. Albeit a meager influence on the power of the apartheid regime, Izwi unified many writers and artists who existed outside the accepted norms of the time, most of whom came from diverse cultural and ethnic backgrounds.

Izwi was a bimonthly, and intentionally adopted an inexpensive format in case censorship or political intervention affected the finances of the publication. Forty pages in length, the magazine was hand-crafted and tended to avoid conventional, more ‘tastful’, literary standards; it opted for younger writers who were hungrier and rawer, as opposed to the pretentions of establishment. Twenty issues were published between 1971 and 1974, with 150 contributors and 50 artists showcased throughout its lifetime.

Izwi was under constant attack from authorities, and Du Plessis, alongside co-editors Stephen Gray and Wilma Stockenström, were often accused of being involved with anti-Afrikaans factionalism, in support of more subversive tribalism, liberalism, and other progressive entities. It challenged literary and political views in SA, and all involved with the magazine were regularly pressured by apartheid authorities for inclusive, pluralist, and experimental views. Staying true to its name, Izwe stood for the equality of all human beings supported by its manifesto, which challenged the apartheid regime’s perspective: “Izwi is the voice of All Africa”. At all times the right to freedom of expression was defended.

Notably, from its first issue onwards, Izwi included original, signed and editioned artwork. As a result, the magazine has become quite valuable and highly collectable, with certain editions including important pieces by Walter Battiss, Casper Schmidt, Alexis Preller, Wopko Jensma, Christo Coetzee, Norman Catherine, Peter Clarke, and Cecil Skotnes, to name a few. Izwi stopped publishing in December 1974 with a flourish, printing a final double issue. It purposefully wanted to subvert the Afrikaans literary, and by proxy, political status quo.

Magazines such as WURM and Izwi were incredibly influential because they went against the grain of literary orthodoxy, especially in the context of Afrikanerdom, providing a refreshing alternative understanding of Afrikaans literary history valid to this day.