Launching an ad agency with 2000 bucks

by Herman Manson (@marklives) Once upon a time, Zibusiso Mkhwanazi and Veli Ngubane decided to launch an integrated ad agency— with R2000 as start-up money.

True story, says Ngubane (29), who was a non-executive director at Ireland/Davenport before he joined forces with Mkhwanazi (30), a serial entrepreneur best known in the agency world for being executive chairman at KRAZYBOYZ digital and later chairman of The Red Quarter Brand Design.

“Digital at the core” 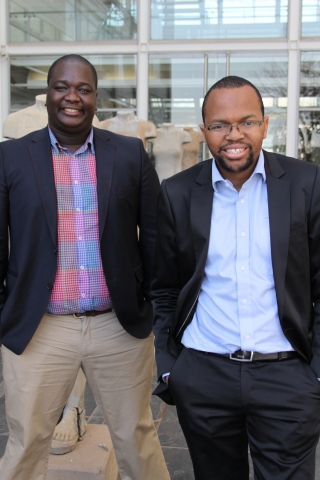 Launched in January 2012, Avatar is positioned as a full-service marketing agency “with digital at the core,” and today counts 20th Century  Fox, National Geographic, Fox International Channels and Dinners Club International among its clients. The agency also employs 28 people in Johannesburg and four in Durban.

Ngubane explains that digital is at the centre of the agency’s creative thinking (it also reflects in the agency name — an avatar is an icon or figure representing a particular person or brand in the digital world), but that that thinking is rolled out across multiple platforms, ranging from outdoor to TV and print. Services range from through-the-line to digital-specific, and the agency aims to reach consumers across multiple touch points.

Considering that Ngubane is from rural KZN and Mkhwanazi grew up in Vosloorus, the digital-centric nature of the agency might surprise some, says Ngubane, but then the agency is very much about challenging stereotypes.

It has an entrepreneurial spirit and knows how to beat the odds, adds Ngubane. Avatar has just had a bumper year in terms of increasing its client base, as well as organic growth in spend from clients — at a time of intense competition among agencies.

The agency is also interested in establishing partnerships in other African countries, especially Nigeria. It would look to work with independent agency partners and like-minded individuals.

Ngubane views the current wave of success by owner-managed agencies as a positive indicator for the future of Avatar. He believes a combination of passion and hard work will allow him and Mkhwanazi to build something that is sustainable and offers clients the best value possible. “We are business people and we take our business knowledge and put it into our creative thinking,” he says.

“All hands on deck”

Ngubane says they hope to build a culture with the heart of small agency but the processes of an established agency. The culture is already one of “all hands on deck” and everyone is responsible and gets involved in delivering to clients.

In terms of KRAZYBOYZ digital, it is a separate agency from Avatar but, with the past involvement by Mkhwanazi, the two businesses do co-operate when the right opportunities arise.

Mkhwanazi is well-known for his David’s League — a mentorship programme designed to uplift and empower young entrepreneurs from disadvantaged backgrounds. It’s a programme supported by Avatar, which sees it as providing an opportunity to bring young black talent into the agency environment.

The biggest challenge the agency has faced so far has been getting clients on board and convincing them that its digital savvy is real — especially because it was gained through self-training. Starting a business without any real finance was also tough — but they made it.

Ngubane says the agency has been getting onto more and more pitch lists. He links a lot of the agency’s success to the belief by its management team in the potential and opportunity of tapping into ‘a creative nation’ that has a lot more to offer the country than working on mines. “We have a lot of creative capital in this country,” says Ngubane.

And, if you know what to look for, you will find them in places such as  rural KZN, or Vosloorus.