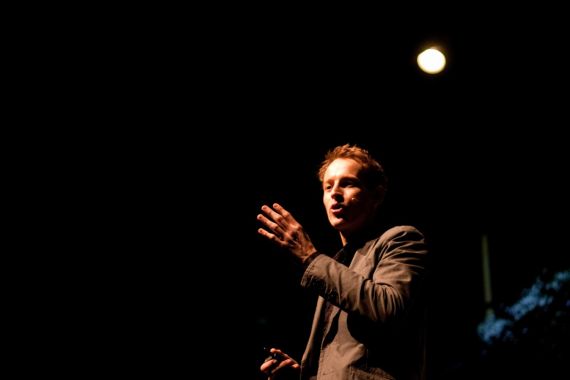 By Herman Manson (@marklives) Design Indaba 2013 Well before Daan Roosegaarde (@SRoosegaarde) ever set foot in this country South Africans were already lining up to see if there might be opportunities to collaborate with the Dutch born artist and innovator.

Roosegaarde is known for exploring the relationships between technology, architecture and people, as with his Smart Highway project, which aims to create interactive and sustainable roads as part of our future landscapes.

Vehicles generating light through wind technology, dynamic lanes, using photoluminescent paint (that charges with sunlight) to create glow in the dark traffic lanes without the need for street lighting, induction priority lanes that charges electric cars as they drive. Roosegaarde wants roads to be more interactive and poetic as they form an essential aspect of our physical environment but has seen little innovation in the past century.

Roosegaarde is visiting South Africa as a speaker at the annual Design Indaba conference taking place Feb 27 – March 1.  He refers to himself as an entrepreneurial artist. He was trained as an artist, has a Masters in Architecture and a keen interest in technology. To ensure what he imagines becomes tangible Roosegaarde says he always knew he needed to work as part of a network of people. He merges his creative and business agendas to ensure his inventions don’t stay projects forever bound to drawing boards.

It’s important for Roosegaarde to “work in the now” rather than to wait to be “discovered” by “some old museum director” in the future. “I’m a hippie with a business plan,” he jokes.

Even though his work has been exhibited in major museums and galleries, including the Tate Modern and the Victoria and Albert Museum in London, he prefers placing installations in public spaces. Interactive design work explores the relationship between technology, emotion and expression like ‘Dune’ (an interactive landscape of light alongside the Maas River in Rotterdam), or his fashion experiment – ‘Intimacy’ (high-tech fashion which become transparent based on personal interactions). Sustainability for Roosegaarde is not about ‘retro do less’ but about participation and activation like with his experimental sustainable dance floor.

According to Roosegaarde our public spaces, commercialised as they are, have become disconnected from people. He describes us as a society living in a state of schizophrenia as a result. We would rather share our emotions in virtual spaces like Facebook than in our physical worlds that are becoming increasingly generic.

This disconnect between our virtual/digital world and our physical world fascinates Roosegaarde who finds his inspiration in exploring what would happen if our involved virtual world could really meet our physical world. Would it reconnect people and their built environment?

Innovation is not just about new technology but also about generating new stories about what our lives could look like (the real role of an artist, according to Roosegaarde). Public spaces should, like a Facebook page, encourage social interactions. Real life engagement and communication between people, Roosegaarde believes, could address many of the social ills we currently experience.

Roosegaarde is also fascinated by the idea that people can hack technology to personalise their environments. Wheels are extensions of our legs and glasses are extensions of our eyes, we are constantly making things to make our environments more understandable. It helps us experience our world in an intrinsic way. Roosegaarde wants to know why he can’t for example wear a plaster on his body telling him what vitamins his body requires – we can use technology to liberate and inform ourselves about our health and energy, things like that. As big systems fail us (hello government and service delivery) people will need to become more autonomous, using technology as a tool to achieve this.

The role of a designer is to update the world around them, to hack it, to create new tools that make the world more understandable.

In terms of his South African trip Roosegaarde says he is keen to learn from the country and the continent. Lots of sunshine and its possibility in terms of implementing his sustainable infrastructure projects excite him. That said Roosegaarde is careful to say he doesn’t want to be just another European designer pitching up to show work that is meaningless in an African context.

Roosegaarde is a firm believes in the copy-more economy. The ‘old economy’ is based on a copy-paste model where you take something, put a margin on it and resell it. Nobody adds any value. This is not a sustainable economic model, says Roosegaarde. With copy-more you learn, improve and upgrade. You do this consistently, doing it slightly differently every time. It encourages innovation and collaboration and adds value to products and projects. It’s a principle that would speak to many African innovators and artists and our sense of Ubuntu.