“If your mother tongue isn’t English, you’ll have discovered that colonialism is alive and well and living in our phones, and it’s killing our indigenous languages,” notes Steph van Niekerk, Grey/Liquid South Africa creative director. From this insight comes the #DecoloniseAutocorrect campaign for Savanna Cider. 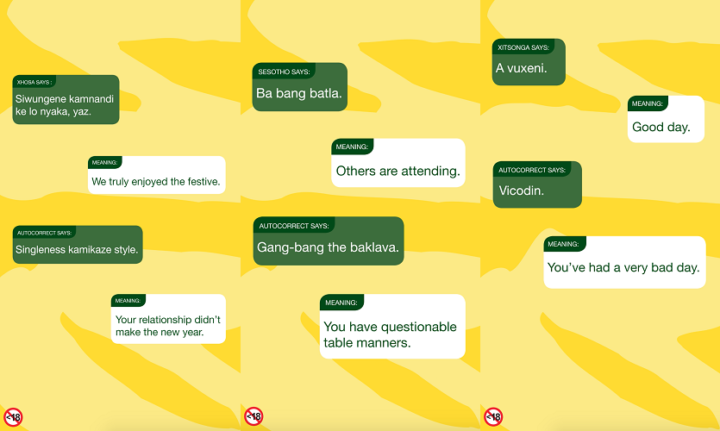 How is it that autocorrect has no problem recognising a sentence such as “The bourgeoisie acquiesced in bequeathing their paraphernalia to the fascists” but try typing in “A vuxeni” and, before you can prevent it, autocorrect has turned it into “Vicodin”? What a headache. The Constitution of South Africa recognises 11 official languages and our phones only recognise one.

Savanna Cider is a proudly South African cider that’s much loved for its unapologetic, crisp witty commentary on the ironies of South African life. It has declared ,“We’re tired of ducking autocorrect forcing South Africans to speak English”, and has set out to liberate people’s phones through a simple hack: simply go to the Savanna mobisite, download a file in the language of your choice and save it to your contacts, finish and klaar.

A contact file takes up little space on your phone and may contain an unlimited number of words. Because autocorrect recognises words saved to your contacts and doesn’t correct them, saving a contact file with the 500 most-used words in a language automatically “teaches” your phone that language. No more autocorrect snafus. No more being forced to use someone else’s mother tongue.

There were 1000 downloads in the first 4 days after launch on 3 December 2019. The campaign will run until the first week of January 2020.

It’s 2019 and our phones are still colonised? It’s time to take action! We’ve got a simple hack that will set your ducking phone free to text in your OWN language. Go to https://t.co/58kxTNyOr0 to find out how. #DecoloniseAutocorrect pic.twitter.com/hRZkkJvBqR