by Wendy Shepherd (@thewordshepherd) I’ve spent the last five years fighting for copywriters — as a lecturer, as a member of the industry and as a copywriter in my own right. At this point, I’m baffled. Copywriting has been a well-sung and honoured career for over 50 years — why do I find myself constantly defending it and, worse, explaining it to people?

I’ve written several articles about it. I’ve been in meetings where I nearly punched people for being obtuse about it. There’ve been countless days when marketing sat me down and announced that “we need to do something about copywriting”. I’ve nurtured, pushed and lifted young copywriters into the industry, only to find that there’s not the hungry stream of ingénues I was hoping for, waiting in my college reception to be admitted to the course. I’ve been tackled by executive creative directors in pizza restaurants, at student exhibitions, on strident phone calls and through passive-aggressive emails about what’s happening to the craft.

People, PEOPLE, I don’t have all the answers. All I can do is tell you what I’ve discovered in the last half-decade and leave it with you, the shadow-boxers of advertising, to run with.

Copywriting is alive and well in London, New York, Tokyo, Berlin and almost any other commercial capital you care to name. Everyone knows what it is, and lots of people are doing it, studying it and taking up the ubiquitous jobs on offer. This curious paucity of talent flow is only happening in South Africa. There are numerous reasons for this, some global, some local.

One of the problems is English. All copywriters in SA are expected to be able to write proficiently in English — as our only international language, that’s the reality — and the depressing answer is that English is very poorly taught in the majority of schools. The prospect of having to write around corners, up walls and through the looking glass is intimidating for English mother-tongue speakers. For those who have grown up not hearing English at home, it can feel insurmountable. Not surprising, then, that a career as this kind of writer would have very little appeal. That millions of people grow up polyglots seems to be irrelevant. It shouldn’t be.

Then there’s the fact that the ad industry isn’t getting into schools like it used to. Many of my fellows and students alike first heard about copywriting because an ad agency gave a presentation at their school and ran a workshop with them. Those same ECDs who repeatedly rattle their sabres at me should shelve their malfeasance in this area and go to schools that need to hear them. Forget Camps Bay and Rondebosch. The kids who really need to know there’s an incredible copywriting career waiting for them on the other side of hard work and a little industry sponsorship are in areas without gloss and electric fences. Go there. They’re waiting for you.

Life is hard. Education is harder.

Taken in a South African context, nobody needs any education in this territory, so why are we still charging an eye-watering premium for copywriting courses? What’s stopping us from offering cheap, accessible courses to young people, who can write the ass off a donkey, except the privilege economy?

How about taking some of that disproportionate wealth and putting it into a revolutionary industry initiative to bring new copywriters into the fold? Education can be made infinitely more accessible if it’s tackled with design thinking and ingenuity. instead of hubris. If the vast majority of prospective students can’t begin to afford the exorbitant fees, what kind of transformation are you hoping for? Bursaries are great but they only scratch the tiniest of itches. It’s got to be bigger than that.

The only thing I remember about the movie Cocktail is the flugelbinders. Elizabeth Shue looked at her takkies and pondered what the plastic things on the ends of the laces were called. Copywriting is a dumb name. I don’t know who came up with it — probably some Mad Man in a whisky-tinged moment of ego wanking — but it’s caused more confusion than anything else. I met someone the other week who asked me what I did and then spent a good 10 minutes explaining how much he needed advice on patenting his idea. This kind of unsolicited soliloquy is fairly common, and the blame falls squarely on the name.

I’ve also had a few tedious meetings with various industry people about changing the name. Okay, to what? With the advent of content creation, we probably do need to universally decide to call it something else but, so far, nobody has come up with anything feasible. My money is on copywriting staying copywriting, for better or worse, and us finding a way to make that mean something again.

We left our passion in our other pants

Somewhere ‘woke’ along the way, copywriting turned into a synonym for creative lying. Everyone is so authentic these days, it’s just impossible to imagine we might have to sell something and use our creative minds to make people buy it. Lovey, you’re selling something every time you pout at your selfie stick and present a banging outfit on Insta. We’re all in that dirty business, like it or not, and authenticity isn’t the problem. Some of the most heart-stilling communication ever created has been made by copywriters. Good copywriting doesn’t presume misrepresentation. And it requires the truly pure of heart to survive an industry as dire as advertising.

I’ve said before that copywriters must be like lions. We are born to do this, and we owe it to the people coming after us to make sure it endures. SA needs copywriting. I’ve seen students who come in with no voice, no confidence and no idea how to use an Oxford comma become creative directors because of copywriting. Who better to transform the industry than people who know that words and ideas can change the world? 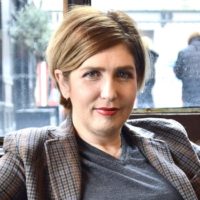 Wendy Shepherd (@thewordshepherd) spends part of her time developing and writing online short courses and accredited full-time programmes in the advertising and marketing environment. She’s also a very happy pharma writer. She’s planning on being a MarkLives columnist once a month and other BHAGS occupy the rest.