by MarkLives (@marklives) We feature insight into the brief, creative idea, production challenges and results of the “#BiogenJourney” campaign for Biogen South Africa from digital sports marketing agency, Retroactive, which ran September 2018–June 2019.

The brief was to showcase Biogen as South Africa’s no. 1 health and wellness brand.

For years, brands have been investing big bucks in the biggest sports stars to help market their products because, according to recent studies (Telegraph), sports sponsorship is capable of driving exponential growth in brand awareness and affinity. To showcase Biogen as South Africa’s no. 1 health-and-wellness brand, we aligned it to someone who didn’t match its brand at all: Hobbo, a 130kg male in the worst shape of his life. Biogen was the vehicle for him turn his life around, from eating badly and not exercising to rediscovering good nutrition and focused exercise discipline en route to finishing the Ironman 70.3 Durban.

In order to remain true to the authenticity of the idea, we adopted a ‘shoot from the hip’ documentary-style approach. We kept the budget lean and followed Hobbo on his journey, produced fortnightly content for Facebook and Instagram, and boosted the content with a small media budget, while the organic interest, and earned media did the rest. This campaign effectively launched Retroactive agency, so we needed it to be light on resources and expenses.

The story was filled with the peaks and troughs associated with a formal narrative arc, and the fan base for the season grew exponentially.

The campaign ran for 10 months and we had the support of the brand in-house social team, as well as the dev team, who hosted new content and built a ‘Hobbo basket’ of products he was using, showcased via Biogen.co.za.

Over the 10-month campaign, fortnightly videos were produced by creative director Ben Karpinski. This involved his capturing moments from Hobbo’s new and improved way of life, and the highs and lows of it. The high frequency of videos created a challenge in the sheer amount of filming needed to keep things interesting but this also allowed for a very authentic story to evolve from one episode to the next. The spotlight also acted as added motivation for Hobbo to reach the audacious goal.

Says Karpinksi, “The #BiogenJourney was a very special experience as it was Retroactive’s first opportunity to create a body of work that reflects our passion for sport and creativity. Personally, it was also unique in that I took on the production duties of filming and editing so as to strike a personal bond with Hobbo and ensure the story could always be very real — certainly a ‘biting off more than you can chew’ situation, but it made the campaign more rewarding as a result.” 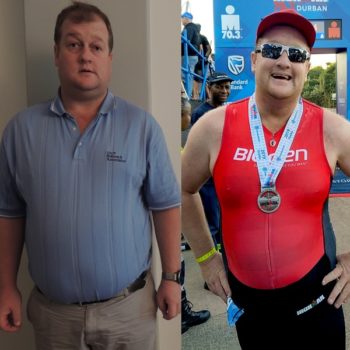 Says Hobbo, “In the beginning I certainly didn’t think too much about finishing this thing; in all honesty, I wasn’t even thinking much about what this transformation would mean to me. But crossing that finish line in Durban, and drawing the #BiogenJourney to a close was something I will never forget. Health benefits aside, this has changed my approach to a few other aspects of life and I’m really happy I decided to give this a go.”