by MarkLives (@marklives) We feature insight into the brief, creative idea, production challenges and results of the “Gun Safe Cities Live Activation” campaign, by Havas Johannesburg, which launched in July 2019.

The charity, Gun Safe Cities, is a group committed to helping reduce gun deaths by encouraging safe use and storage of firearms, and promoting awareness around the dangers of firearms when they are casually and improperly handled.

The idea was to highlight that the people most likely to be shot with one’s firearm is the owner or a family member. Why? Because so many guns aren’t stored and handled as the dangerous things that they are.

We highlighted this fact by inviting people to a shooting range for a fun shooting session. When they looked at the target they had fired at to check their accuracy, they saw that in the middle of the paper target was a picture of themselves, followed by the message that the person most likely to be shot with your gun is you or a member of your family. 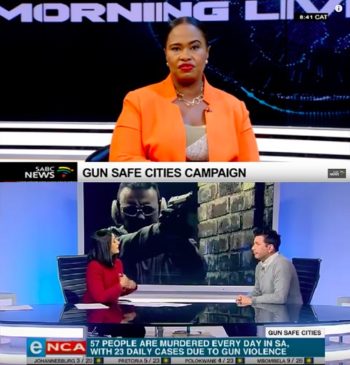 Havas was surprised by the angry reaction to the campaign, according to John Davenport, Havas chief creative officer. “I think people didn’t take the time to see that we weren’t saying they shouldn’t have guns, just that they need to be stored and looked after very carefully. The extreme reaction included dozens of angry mails, calls and one x death threat on social media….

“The cultural divide between pro-gun and anti-gun worlds is so extreme that there seems no room to listen for either party. As soon as you say anything that isn’t overtly pro-gun, the pro-gun lobby reacts very strongly. They see themselves as a persecuted minority and react accordingly at all times. I was really surprised at how this group reacted. The idea that a gun keeps them safe is so integral to a world view that any conversation around it is almost impossible.

“I think it reflects a world that is increasingly divided and radicalised due to internet conversations and a media world where people only communicate with people who agree with them, and are conditioned to fight with everyone who doesn’t. This may well have been the most interesting part of the whole project.”

Thus far, we have gained R20m worth of earned media from an initial investment of R5000.