Revolution isn’t necessarily a word that one would normally equate with the current millennial generation. Bombarded by media, with days spent living through devices and experiencing the world through various screens, one would be forgiven in thinking that propaganda is a more-effective word. The current issue of The Economist links Soviet propaganda with millennial socialism in a parody that riffs off an iconic 1924 poster designed by Alexandre Rodchenko, featuring a collaged image of Russian avant-garde member, Lilya Brik, titled “Books (Please)! In All Branches of Knowledge”. The reference made here to this poster, and its title, suggests a few contentious readings about the state of youth culture, and the perceived resurgence of socialism in the first world today. 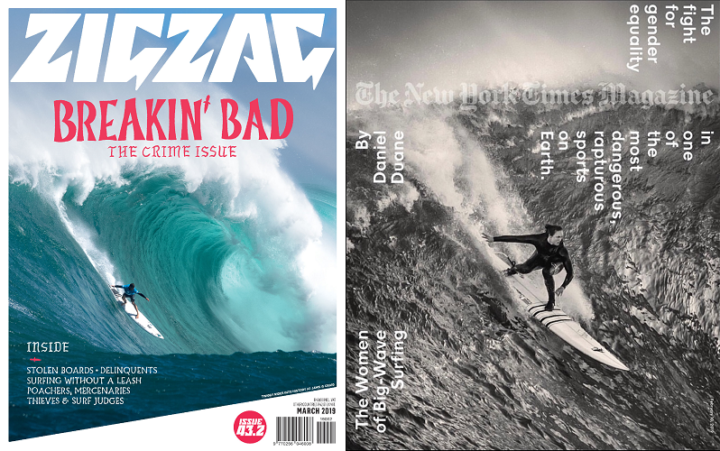 Two magazine covers appeared recently with surfing as their primary subject matter. Each cover comes from magazines with vastly differing perspectives, and a comparison between the two sheds light on the schism of cultural dynamics between international and local perspectives.

Locally, ZigZag issue #43.2, themed “The Crime Issue”, references an all-too-familiar topic, delivering stories from the darker side of surfing culture, including criminals within the surf community such as poachers and mercenaries. The cover, featuring Grant “Twiggy” Baker, is bold and expressive, especially with its intentional use of crude hand-lettered typography, exhibiting the rawness and rusticity innate to the local vernacular.

Internationally, the cover for 10 February 2019 issue of The New York Times Magazine sports an epic black-and-white image, shot by Dina Litovsky and featuring professional surfer, Paige Alms. This striking grayscale photograph is completed by a tasteful choice of typography counterpoised by horizontal layout executed in textbook fashion, making readers physically interact with the magazine. A subject that keeps showing how backwards-thinking so many men are, this issue brings attention to the plight of women and the lack of gender equality within the sport of surfing. The fact is, Alms successfully competes on the same big waves as her male counterparts in one of most-dangerous sports known to ‘man’.

The juxtaposition of the wild and fluid background with the formal composition of the typography in the foreground effectively creates a sense of dimensionality and delivers a strange sense of respite and peace. A still, quiet, almost spiritual moment in time.

The gaming industry is now far bigger than the film and music industries combined — and the gaming audience is expected to grow so large by 2020 that the market will be worth US$90bn. This stems from the numbers for 2017, which valued the market at US$78.61bn. Yet most people still don’t take gaming seriously.

Ubisoft, the software company responsible for the creation of iconic gaming franchises such as Assassins Creed, Prince of Persia, and Far Cry, among many other classics, is attempting to change perceptions. “Ubisoft — Stories”, a product of the company’s subsidiary in France, has created an online platform that will make most film websites bend the proverbial knee. Showcasing the technological, cultural, and philosophical ingenuity of gaming, all within the rubric of the entertainment industry, Stories decodes the social, ethical, and structural responsibilities and challenges within the industry. With the assistance of media partnerships, Stories ultimately delivers an overall ‘Ubi-vision’ for the industry. The site itself is a great example of website craft, with layered interactive elements, animated transitions, dynamic layouts, considered design, intuitive navigation and multidirectional information hierarchies, all leading one to some compelling storytelling. 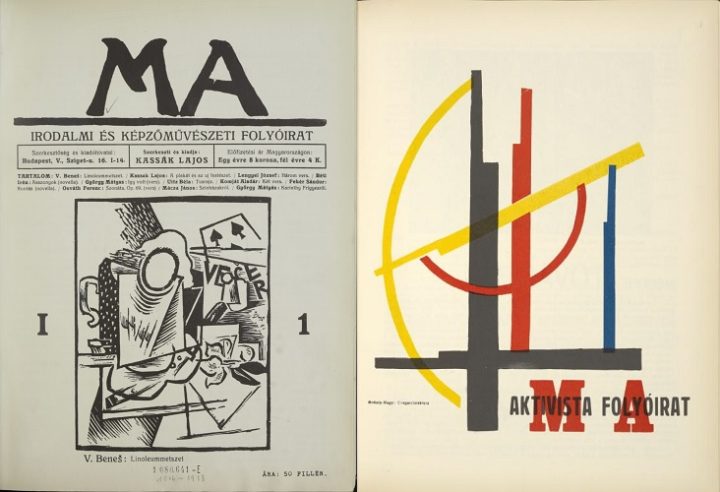 In November 1916, Hungarian poet and artist, Lajos Kassák, founded an avant-garde magazine called MA: Internacionális Aktivista Müvészeti. It took its baton from a banned magazine called A Tett (“The Deed”). MA refers to the movement “Magyar Aktivizmus”, meaning “Hungarian Activism”, but also happens to be the Hungarian word for “today”. Initially published in Budapest, by 1920 Kassák had to move his publication to Vienna due to hostility from the conservatives and left-wing in Hungary, who negated modernist or avant-garde tendencies for their perceived communist foundations. In 1919, MA was banned in Hungary. From Vienna, MA evolved into an international platform for the avant garde, highlighting Hungarian activism. As a result, MA is seen as a broader group of Hungarian artists and writers, aside from being an avant-garde periodical, including historic modernists such as painter and photographer, László Moholy-Nagy (who made the cover for issue 7-1 in 1922 featured above), and composer and musician, Béla Bartók.

MA’s inaugural edition had a cubist-inspired cover designed by Czech artist, Vincenc Beneš, which introduced the avant-garde character of the group. MA stressed the social role of art, fueled by the revolutionary perspectives of other avant-garde movements in other parts of Europe, notably the constructivists, futurists, expressionists, cubists, and dadaists. The constructivist worldview, however, seems to have inspired the biggest increase in avant-garde activity in Hungary. Due to continued hostility from conservatives and the left in Hungary, in 1925 MA ceased publication after Kassák returned home.

Immortalised on so many magazine covers over the decades, Karl Lagerfeld, a cultural icon famous for his historic contributions to the fashion industry and the creative director of the French fashion house Chanel, passed away on 19 February 2019. Here is a selection of some recent covers in honor of his canonic cultural contribution.