by MarkLives (@marklives) This week we feature insight into the brief, creative idea, production challenges and results of the “Toyota Corolla Love Letter” campaign for Toyota South Africa from FCB Joburg. 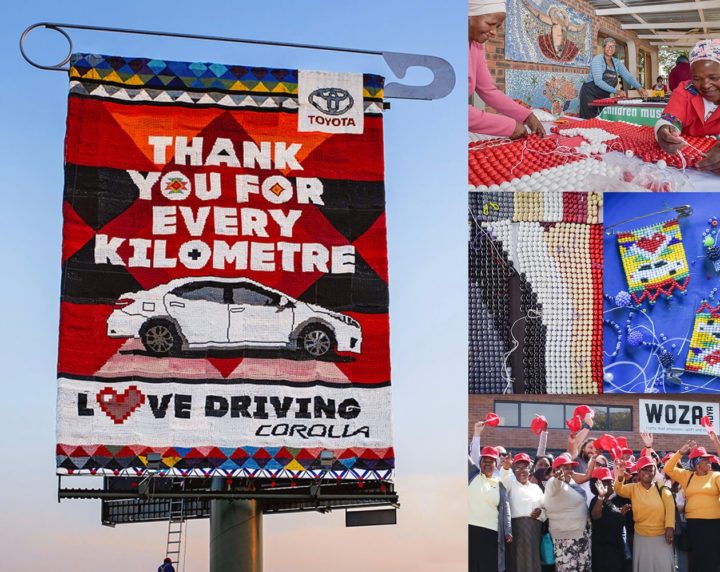 The Toyota Corolla Special Edition was launched this year and FCB Joburg was tasked to create a social campaign for it, as well as highlight the full Corolla range, for continued awareness. It did that… and then some.

The topic of love is a dominant theme in the social life of people the world over and, since time immemorial, people have sent their beloveds letters expressing their interest. Whether that letter takes the form of a handwritten sonnet, a typed essay, an SMS, or even a beaded brooch, the intention remains the same. Zulu people are famous for their beadwork and, with the exception of items used by ritual specialists, it all relates in some way to love. The Ibheqe — or love letter — is a small, postage stamp-sized plaque of beads (often suspended from a safety pin so that the love letter may be worn like a brooch) that conveys an emotion to recipient, usually a favourable or unfavourable inclination towards the advances. The combination of the pattern and colours of the beads convey a subtle message, without the need to speak.

To celebrate the launch of the Special Edition Corolla, FCB Joburg decided that the use of Zulu love letters as an art directional device would be a fitting way of celebrating South Africa’s most-loved car, the Corolla. This quickly grew from an art directional device to one of its most-ambitious billboards yet. The biggest beaded love letter ever, to be exact. But then the agency asked itself, what if it created a billboard that not only spoke about love but also spread the love? To this end, it partnered with Woza Moya, the economic empowerment project of the Hillcrest AIDS Centre Trust, in KwaZulu-Natal (KZN) to help it execute this audacious creation and KZN, being the home of Corolla, made this partnership the perfect match.

Woza Moya’s mission is to promote creativity that creates economic empowerment through traditional, quality local crafts. By selling to Woza Moya, crafters are empowered to become self-empowered and self-employed.

Paula Thompson, Woza Moya founder, says that “it’s been an amazing project just in terms of scale… we have taken on big projects but nothing like this” and “for me, the real heart-warming part about it is that it is creating mass employment.” She adds that “the pay-out from the billboard and the love-letter pins gave all of our crafters triple their income for the last three months.”

From origination to execution, this was a collaborative project between Toyota, FCB Joburg and the crafters at Woza Moya. Tian van den Heever, project creative director, says “it was amazing to mobilise such an enthusiastic, amazing, vibrant force to create something so beautiful… that’s really real, that’s really crafty and really South African.”

Mark Ewing from Red Dot, the company responsible for erecting the love letter, initially noted that this beaded love letter was a “tremendous challenge [and] some said that it could not be done”.

The scale of the project wasn’t the only obstacle the group faced. Since the women at Woza Moya hadn’t worked with wooden beads before, they had to be trained for a week before the stitching could begin. Once trained, each of the 350 dedicated beaders working on the billboard received a metre-by-metre panel to be beaded. Each of the 108 panels was then meticulously stitched together. Finally, the assembled love letter, consisting of 138 000 hand-stitched beads, weighing in at almost a ton, was crane-lifted onto a truck bed and transported to Joburg.

Since FCB Joburg wanted as many South Africans as possible to see this one-of-a-kind billboard, it opted for a site on the M1 De Villiers Graaff Highway after the Crown Mines interchange. This location offers a diverse audience and approximately 214 422 cars drive past there daily.

While the billboard was being created, an additional 600 ladies from as far afield as Pongola and Jozini were stitching 7500 mini beaded love letters. These letters were distributed to dealerships nationwide and handed out to Toyota fans during Heritage Month.

Because of the positive feedback being received, a second site where the love letter may be installed is currently being investigated. The intention for the final home of this work of art will be the Toyota plant in KZN.