It doesn’t take much to observe that many mainstream food publications tend to clone each other’s style; one only needs to do a simple comparison of magazines such Bon Appétite, Good Housekeeping, Food & Wine, and EatingWell, to name a few. The cover to the upcoming October issue of MyKitchen is no stranger to these incredibly popular trends, and as such comes across as a middle-of-the-road effort.

Food magazines on the extremes of what MyKitchen is attempting here include the edginess of Lucky Peach (now defunct) and Put An Egg On It, and the high-brow approach of Gastronomica, Kinfolk and Diner Journal. The one extreme is experimental, youthful, and maverick, and the other extreme is more sophisticated, tasteful and vanguard.

Although situated in the neutral middle-ground of these prolific and creative extremes, on a positive note, My Kitchen’s art direction and photography are clearly on par with its international counterparts, sans the engaging conceptual edge that magazines such as Put An Egg On It would contribute, or the sense of taste that Kinfolk would have.

The Guardian Magazine and The Observer Magazine, (UK), September 2018

This week, two sister publications, The Guardian Magazine and The Observer Magazine, both reference the work of important artists within the rubric of modernism.

Themed “balance”, the cover to the last issue of The Guardian Magazine is a clear reference to the work of the iconic modernist sculptor, Alexander Calder, who transformed traditional perspectives of sculpture with his invention of the mobile. A term first coined by Marcel Duchamp in 1931, mobiles are light, suspended shapes that move through, and alter, surrounding space, as opposed to a stagnant, solid object with mass and volume. Calder’s mobiles are the epitome of balance and form, and the colours he used suggest the influence of Joan Miró with his original brand of organic surrealism. All these influences are evident in the work of contemporary artist, Robbie Simon.

Themed “calm”, The Observer Magazine commissioned London-based artist, Kyle Bean, to craft an artwork that could illustrate the act of coping with the stresses that come with the pressures of modern life. Aside from referencing the work of minimalist sculptor, Dan Flavin — particularly his early series titled “Icons”, 1961–1963, the first of his works to incorporate electric lights — Bean appropriated his concept from a popular buzzer game, which can be quite stressful to play, with the charged metal rod of the game fashioned into the word “calm”. Minimalism meets Zen. 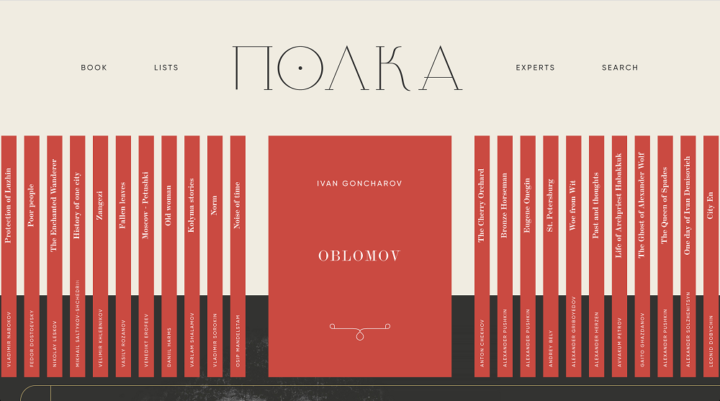 The history of literature is organic and erratic, with many important pieces of writing going unrecognised or lost to obscurity, and others considered as classical or canonical, all depending on the ideological ebb and flow of time. In this context, Shelf (“Полка”) is a didactic online archive detailing historic pieces of Russian literature, a canon of work that helped to define the human condition. This selection of books is curated by a panel of specialists in the field of Russian literature, including writers, critics, publishers, and teachers, all mentioned in the Experts’ section of the site. In total, 108 historically significant publications have been included in this collection. Interestingly, the most-popular book selected by the panel of experts is Mikhail Lermontov’s Hero of Our Time.

The site is easy to navigate, making information accessible and easy to understand. The main page offers an abstract visual display of a shelf presenting all the books in the selection. The Book section grants access to the curated collection of books selected by the panel using different filing systems, including by rating, chronology, title and author. The Lists section leads to interactive elements, including topical texts, audio and video, all related to the Book section.

The site subtly hints at Russian traditions in visual language as well, specifically the constructivist movement and the dominant use of a black, white and red, colour swatch, and a strong preference for abstraction and formalism, exemplified by its dynamic grid, geometric forms, and formalist approach to layout. 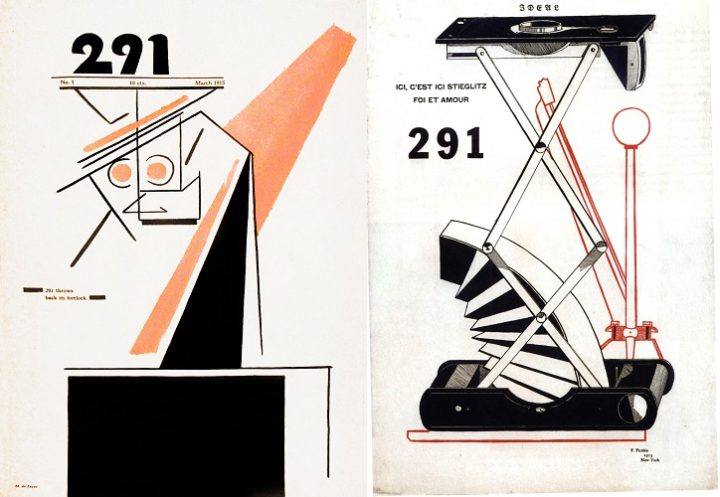 291 was the first manifestation of dadaism in the US, more so a ‘proto-dada’ publication of sorts as it appeared before dada had taken root in Zürich in 1916. Based in New York, 291 magazine was an offshoot of Alfred Stieglitz’s infamous Fifth Avenue gallery of the same name. Focused on avant-garde tendencies, 12 issues of the publication were printed from March 1915 to February 1916. Limiting the print-run to 12 had always been the plan, and three issues were double issues, making a total of nine print-runs in actuality. The magazine became more than just a printed document, styled into a bona fide work of art in itself. Moved by the work of French poet, Guillaume Apollinaire, and his concrete poetry and calligrammes, 291 took a more experimental form that other magazines of the time. The large folio format was an interesting choice, simultaneously existing as a single gatefold sheet of paper and a regular magazine. Every issue had 4–6 pages, bound together to create a foldout spread, with no advertising.

Focused on experimental happenings within the arts and literature, 291 was a critical juncture between Stieglitz’s other publication project, Camera Work magazine, which was a quarterly photographic journal published by him between 1903 and 1917, and Francis Picabia’s 391 (mentioned in last week’s Media Design column), published in 1916 and styled as 291’s European avant-garde heir.

Stieglitz was predominantly on the sidelines of 291’s editorial efforts, with three other members largely responsible to produce the magazine, including Mexican artist Marius de Zayas, American writer Agnes E Meyer, and French photographer Paul Haviland. Together they would publish original art and writing or invite the expertise of key artists, such as Picabia himself, and other noteworthy avant-garde artists.

Picabia happened to be a close friend of Apollinaire, whose work informed the visual language of 291, especially its design and format. The layout was inspired by Apollinaire’s second volume of his own journal, Les Soirées de Paris, published in France between 1913 and 1914. The cover for the first issue of 291 was created by De Zayas, who injected the conceptual and stylistic traits of Les Soirées de Paris into the magazine, which would later inform Picabia’s 391. Thanks in part to 291 and other like-minded publications across the globe, dada became a truly internationalist movement, and in America there was certainly no other magazine like it at the time.