by DK Badenhorst (@BrandCultureSA) It’s argued that comparative advertising is an ineffective way of building brands, and this isn’t without merit. But sometimes it does work.

The idea of brand-building is to create a cultural entity that resonates with people which, in turn, can serve as an anchor for everything, ranging from communication to product innovation. It’s the abstract component of a business or a product that allows us to build relationships with it.

As these relationships evolve and the symbolism become part of the landscape, brands create symbols that allow us to cobble together an identity and communicate that identity to others. Being an adidas person is very different to being a Nike person, and yet both are concerned with excellence and expression in the world of physical activity. Tribes form around them, which inevitably means you are one thing and not another. In the world we live in today, there’s definitely a battle for identity and belonging going on. When it comes to identity politics (currently the dominant style of debating), being one thing and not the other can become deeply polarising. This is dangerous cultural territory as, more often than not, a healthy society is one that allows for the flourishing of many values without necessarily pitting them against each other.

But sometimes comparative advertising can work. There is an old and well-known example that I like: most South Africans of around my age will remember the famous Mercedes-Benz Chapman’s Peak commercial.

It was a simple concept that hammered home the safety of Mercedes-Benz by simply retelling the true story of Christopher White, who plummeted around 100m off Chapman’s Peak and survived. The TVC contributes his survival to two simple facts: he was wearing a safety belt and he was driving a Merc. The video quality shows the age of the ad but that doesn’t take away from it. The moment the bonnet with the three-pointed star veers off the road into nothing still sends chills down my spine. That it was real and that it reinforced a key feature of the product made it a relevant and memorable piece. But this wasn’t the comparative commercial.

Not long after, Mercedes-Benz’s biggest rival responded with the famous “Beat the bends” ad.

It was a tongue-in-cheek piece that shows a 5 Series BMW along the same stretch of road but, instead of plummeting and surviving, it simply navigated the road successfully, closing with the line, “Doesn’t it make sense to drive a luxury sedan that beats the bends?” I can’t imagine anyone not seeing the word play making a clear reference to a particular competitor and a very particular commercial.

But why is this a good example of comparative advertising? First, it’s important to understand the claim of the TVC. Now, we can get lost in the fantastic play on words and that, in technical terms, a BMW is known to be slightly better around the corners than a Merc. This little technical detail (true for the two models in question) will only add to the wit. But the real claim is that it just makes sense to drive the better car, the BMW.

I love this— not because it’s one brand against another but because it was made by these brands in this category. The rivalry between BMW and Mercedes-Benz is known by ordinary people and car fans alike. If you’re unaware of this, you’re probably not familiar with the entire category of luxury saloons. It’s a rivalry that dates decades back. They developed products around this rivalry. The M3 itself is a response to the Mercedes Benz 190E (the 2.3-16, in particular) which, at the time, dominated race tracks. Their past is riddled with responses to each other in a not-so-cold war race to be the better saloon.

This isn’t just the two brands — it’s the category. Cars are about competition and, while many sub-brands own economy sections aimed at transportation, the mother brand will only be considered a serious brand if it has racing credentials. Audi is now considered one of the big three German automakers but could only get there through dominating rally tracks around the world, most notably the now-banned Group B rally. And, in a later Audi RS3 commercial, it tapped into its history through the approval of legendary race driver Michèle Mouton.

Mouton herself is a living example of the competitive nature of motorsports and, ultimately, the automotive category. Her response to Bobby Unser’s sour grapes after she took his Pike Peak Hill Climb record sums it up: “If you’ve really got balls, race me back down again.” If you want to be relevant, be faster.

The “Beats the bends” as is therefore not only a brand commercial; it’s a car commercial. The piece is rooted in the category, the history of the brands involved and the attitudes of the people who buy these cars. In a category born in racing, a comparative positioning is almost the point.

Is this always true? Can we always celebrate the comparative positioning? I think not. I recently came across the series of Ingenius ads for the new Galaxy S9. They play on all the old tropes of the Apple stereotypes: a too-cool store clerk, all knowing but without any pragmatic answers — all brand, no product. The seven videos touch on seven features of the S9 that trumps the new iPhone X. They are all things we know about: removable SD card, 3.5mm plug and, to the real experts, download speed. Someone walks in, asks the clerk the question and, in some shape or form, he’s left either without words or with an irrelevant reply.

To those who remember the ‘I’m a Mac’ ads, this might be their own doing. But I would argue that the world has changed enough for this not to be the case. In the days of Mac vs PC, you had two competing sets of consumers. There’s more to it but, for simplicity’s sake, I’ll call it creatives vs geeks. Those who loved the sleek design and priority that Apple gave to a machine’s aesthetic, and the tinker crowd who liked the idea that you could open a PC, slot a new part in and fire it up again. The former loved a machine that was created for them and the latter preferred a machine that they built for themselves. Much like the automotive example earlier, the “I’m a Mac” work played on an existing phenomenon in culture and amplified it through their work.

The S9 ad isn’t doing the same, first because of the brand involved and, secondly, because of the nature of the category. Unlike the luxury saloon category (or computers in the noughties), cellphones are a relatively ubiquitous item. A few years ago, you could hardly attend a technology conference and not hear about the staggering rate at which mobile phones are making inroads in all markets. Today this is no longer news; relatively powerful phones are available from under R500.

Mobile phones as a category is not polarising; having one doesn’t make you part of any group (refer back to computers a few years back and luxury automobiles). Mobile phones, instead, are equalisers. And, much like internet connectivity is coming close to being a basic need, so are cellphones becoming devices without which people can’t function above a certain point in a complex, modern society.

This, however, isn’t to say the brands can’t have different takes on the market. I would argue that, with such a vast piece of real estate, the brands stand to really mean something unique to a great variety of different people in the market. But offsetting against a competitor in terms of branding doesn’t have to be direct and shouldn’t be a product comparison.

Why our product exists

I believe that our first step should always be to understand why our product exists in the first place. Where is the category from? In the case of the automobile, it’s rooted in exclusivity (remember that Henry Ford only democratised cars in the 1920s) and before that we had chariots and horses — all drenched in meaning around power, success and conquering. Note here that we’re not talking transport industry as this has a very different history. The mobile phone will have its roots in the slow progress of communication technology, starting with smoke signals and storytelling through to the printing press, telecommunications and, today, the mobile phone. The reason for the category is different and I believe that category players should embrace that.

The iPhone 5 launched with a significantly better camera — something worth talking about. The ad, however, didn’t mention a Galaxy or Samsung at all. Probably because cultural references like the iStore and the cult-like following have never been created on the other side. Instead, the commercial was about pictures.

It’s an ad that dated a little bit and echoes the old Sony Bravia ad from years before. But it still captures the magic of personal photography — the ability to catch and keep precious moments that may sometimes be small and fleeting. The ad shows us a device that can improve life and isn’t ‘just be better than the other one’. In it, the iPhone talks to me and not about the Galaxy.

In a world of cut-throat business, where short-term sales can easily take priority over long-term brand-building, we should take care not to make our brands about the products — especially when those ads become comparative. The result is, far too often, a well-packaged sales pitch with the artillery facing directly towards the competitor and where the people in the marketplace become collateral in a battle between companies.

This is particularly regrettable these days where mass communication devices and the platforms they connect to have been used to manipulate our behaviour and warp our perceptions. There’s a twist of irony that the mud-slinging through short messages without context (the Ingenius commercials) beautifully mirrors the behaviour it empowers on social-media platforms that allows us to weaponise social communication and polarise our societies.

Our technology brands, with the fingers deep in our everyday lives, can take a leaf out of the automotive book. We have isms today for as many things as we have any significant differentiation among people. Where luxury cars work to define what it means to be successful (and they do), our technology brands could better define what it means to be connected and create ideas that bring us closer together and think better of each other. 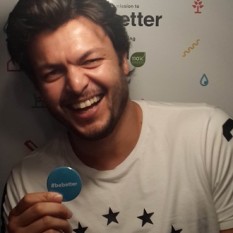 DK Badenhorst (@BrandCultureSA) brings cultural context and long-term trend insights to brand communication through cultural insight and semiotics. He is back to contributing the monthly “Brand Culture” column, exploring the value and meaning interaction between brands and society, to MarkLives.com.