The South African fast-food industry has emerged as a top performer in the latest National South African Customer Satisfaction Index, SA-csi, compiled by managing consultancy, Consulta, and released this week. 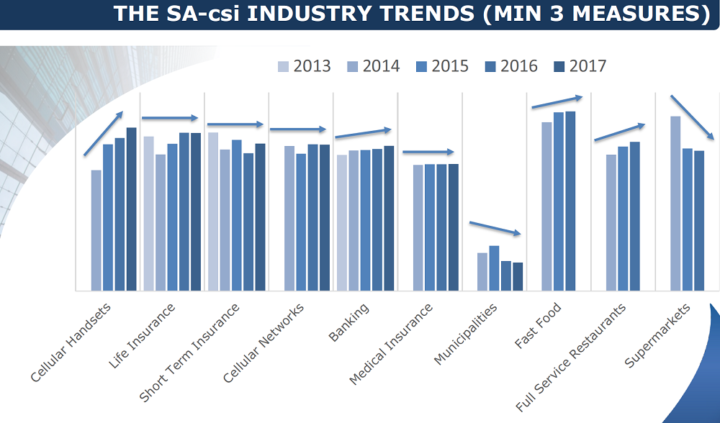 The five-year results (2012–2018) show consumer industries such as Fast Food, Mobile Handsets and Life Insurance were the best performing sectors, with scores ranging from 79 to 82. On the other end of the spectrum, municipalities and wireless internet providers delivered much-lower scores (59.3 for main metropolitan municipalities and 67.8 for wireless internet industry).

Industries on the rise that have improved their year-to-year averages include mobile handsets, banking, fast food, life insurance and full-service restaurants. Short-term insurance, cellular networks and medical insurance have been stable over the period, while municipalities and supermarkets are on the decline.

During the recent CEM Africa 2018 conference, Prof Adré Schreuder, SA-csi founder and chair, said SA companies need to focus on achieving a more-consistent and -positive level of customer experience to reap the benefits of the positive financial outcomes associated with higher levels of customer satisfaction: “Over the years, the SA-csi has consistently reflected a strong relationship between customer satisfaction and sustained business performance. It is interesting to see that the average perceived value metric — a perception of value-for-money — across all surveys also closely correlated with movements in key economic indicators such as GDP, inflation and the rand value relative to major world currencies.” 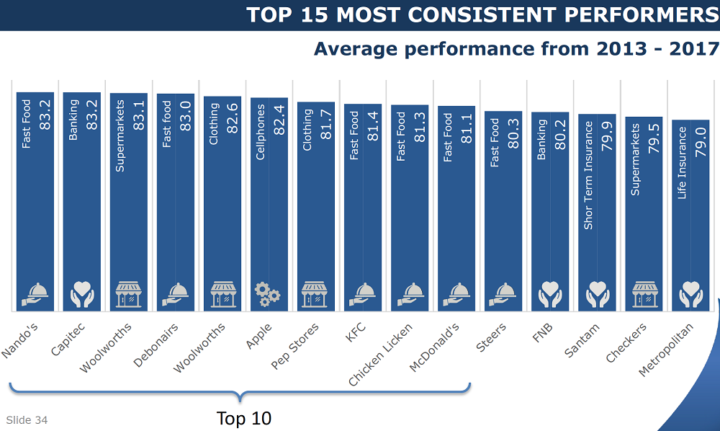 The index reports that Nando’s (fast food), Capitec (banking), Woolworths (supermarkets and clothing), and Apple (mobile handsets) are the consumer brands that consistently outperformed their competitors in terms of customer satisfaction from 2013 to 2017. In short-term and long-term insurance sectors, Santam and Metropolitan showed consistent high scores respectively.

“The success of fast-food restaurants demonstrates how consumer-driven the SA economy is. It’s a good recession-proof industry that often experiences a slight uptick during economic downturns, as consumers spend more time at work and eat out more often.”

The “middle-class retreat” is one of the most-influential megatrends identified by Euromonitor researchers, a long-term fundamental shift in behaviour, crossing industries and shaping the future of global markets. 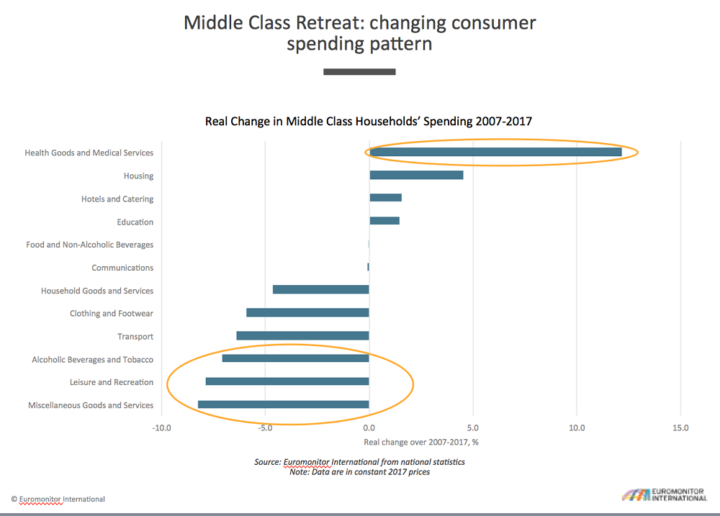 Middle classes in Asia are booming, while the middle classes in developed markets are struggling to maintain the economic position they’ve enjoyed for the last 50 years. It is the middle-classes, nevertheless, that remain the drivers of consumption and an important target group for businesses, brands and entire industries.

Explains An Hodgson, Euromonitor International head of income and expenditure research, “Middle-class households in developed economies have not enjoyed any meaningful real gains in their purchasing power, nor experienced any significant improvement in their standards of living since the global financial crisis. The median incomes in many major developed countries have not even returned to their pre-crisis levels.”

As the middle classes in developed countries struggle to maintain their economic status, they’re reassessing their values, ownership and priorities. Chris McNiff, Euromonitor International consultant, says: “One of the most-interesting dynamics is the shift from ‘having’ to ‘being’. Driven by stagnating incomes and the desire to simplify their lives, middle-class consumers are becoming more selective in their consumption. With this being the case, they choose to own less and instead put their money towards ‘experiences’. Many businesses are reinventing themselves to meet the changing consumers’ need to become synonymous with socialising, relaxing, and enjoyment.”