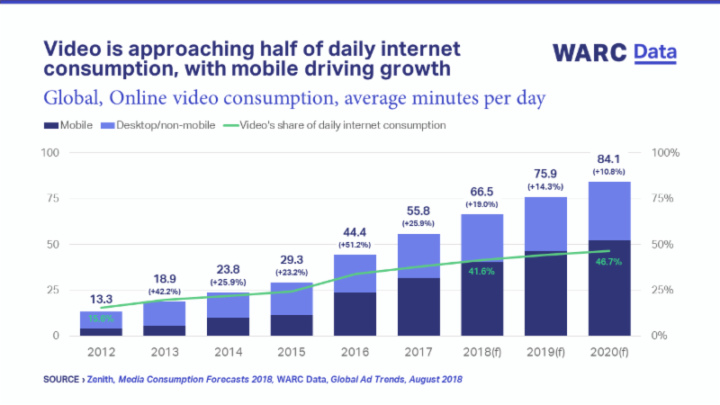 The rise of mobile usage is driving video consumption, which in turn is driving up advertiser investment in video, with online accounting for 17.5% of global video spend this year. This compares to an anticipated rise of 1.1% for linear TV, which equates to US$140.2bn — on a par with the level recorded in 2010. Consequently, online video is set to account for 17.5% of the total US$170bn spent on video advertising worldwide this year, up from a share of just 1.3% in 2010. Most of this money is going to social platforms such as YouTube and Facebook.

Online video is set to account for almost half of daily internet consumption, with mobile driving growth. Projections show consumption will rise to 84.1 minutes per day in 2020, up 26.6% from a projected 66.5 minutes this year. Of this, 62.3% of the time will be spent watching via mobile devices (compared to 60.7% currently).

Data for the second half of 2017 shows that at least one in 10 online video ads poses a risk of negative adjacency to brands. For mobile, the content types that pose the most-frequent brand risk are violence, and offensive language and controversial news, regardless of whether the ad is bought programmatically or publisher direct. Fraud also poses a risk to online video advertising, especially if the ad isn’t optimised against such activity. A recent study by Guardian US and Google found that as much as 78% of video spend is susceptible to fraud if publishers don’t employ the ads.txt script within their websites.

Summing up, James McDonald, WARC data editor, says: “The vast and continuing increase in video consumption via mobile devices has directed ad dollars to social platforms, despite the well-documented and persistent risks around negative adjacency and ad fraud. Facebook hopes to regain the initiative with its Watch platform, which is being positioned as a safe brand environment offering advanced audience segmentation.”

To purchase the report, go to WARC. 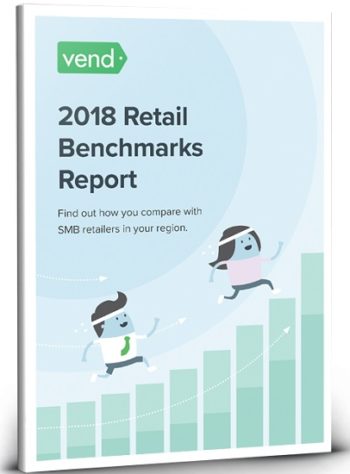 Over the past year, South Africa’s independent retailers enjoyed sales volumes 25% higher than the global average, according to data from the 2018 Retail Benchmark Report from retail management software company, Vend.

Vend compared data from over 13 000 retailers using its services around the world, revealing that globally the average independent retail store makes US$22 300 (R320 000) per month, with a gross margin of 51%. Independent retailers in SA are bucking that trend, however, with monthly sales volumes a huge 25% higher, and revenue 9% higher than the global average. Across SA, monthly sales volumes per store were 36% higher than retailers in North America and 5% higher than those in the UK.

Worldwide, Vend’s data showed that furniture stores and beer, wine and spirits stores had the highest revenues, while beauty and cosmetics stores tended to earn the least, on average. In SA, the top three verticals with the highest gross monthly revenue compared to the average for African retailers are:

A new report from Forrester, “Consumers Are Connected; Your Company Isn’t”, addresses the issue of customers being more connected than ever, with businesses lagging behind in adopting the same devices, platforms, and channels to meet consumers where they are.

The report demonstrates that investment in customer-focused mobile experiences pays off: Among customer experience (CX) transformer firms — those that employ mobile to transform CX — 55% has seen a significant positive financial impact due to mobile, compared with only 16% of shrink-and-squeeze firms.

A growing number of customers use emerging devices, channels, and platforms, such as smart speakers, mobile wallets, and Facebook Messenger, but most firms have been slow to build experiences for these new technologies. About a third of mobile executives don’t know their plans for progressive web apps and instant apps — two mobile technologies that are increasingly important as firms shift to bite-size mobile moments.

The report is intended to help digital business strategy professionals benchmark their use of mobile and emerging technology against the tech that their customers and other firms use.

To purchase the report, go to Forrester.