by MarkLives (@marklives) #Campaigns is our new weekly column featuring insight into the brief, creative idea, production challenges and results of South African communication campaigns, both ongoing and recent. We kick off by highlighting Nando’s South Africa “#rightmyname” by M&C Saatchi Abel, which launched in February 2018.

Last year, Nando’s celebrated 30 years of firing up South African conversations with advertising that taps into the social quirks that make this country unique. There have been many moments, big and small, in the last 30 years, where South Africa has pulled itself back from the brink. Whether it’s uniting as a nation to usher in democracy or simply finding a way to negotiate yet another petrol price hike, we always find a way to fix our sh*t.

So, at the end of 2017, Nando’s launched the “we can fix our sh*t” campaign to celebrate all of these mini wins. This launched with a typically provocative TV ad that contrasted the big wins with the everyday issues of SA life. From the elation of 1994 freedom to the absurdity of our street-pole headlines, the campaign showed how the people of SA always find a way.

It may have started life as a broad statement about SA resilience but the campaign quickly became a tool for Nando’s to ask itself where it starting in its own business, could do things better. It turned out the answer had been staring it in the face from the bottom of its email signatures, in its name “Nando’s” and its famous spice “PERi-PERi” — two things that even after 30 years still had the red line. That was never going to fly with Nando’s; it was time to say “vo*tsek!” to spellcheck.

It didn’t stop there, though. The talk turned immediately to all the other non-traditional English names in Nando’s, the Naledis, Nivals, Thabisos and Shireens; spellcheck’s red line was calling their names a mistake, too.

In conversation with its advertising agency M&C Saatchi Abel, it became clear that spellcheck and its dismissive red line had no place in a country that’s built on the power of diversity. It was time for it to be removed and together they’d do so with the launch of the #rightmyname movement. 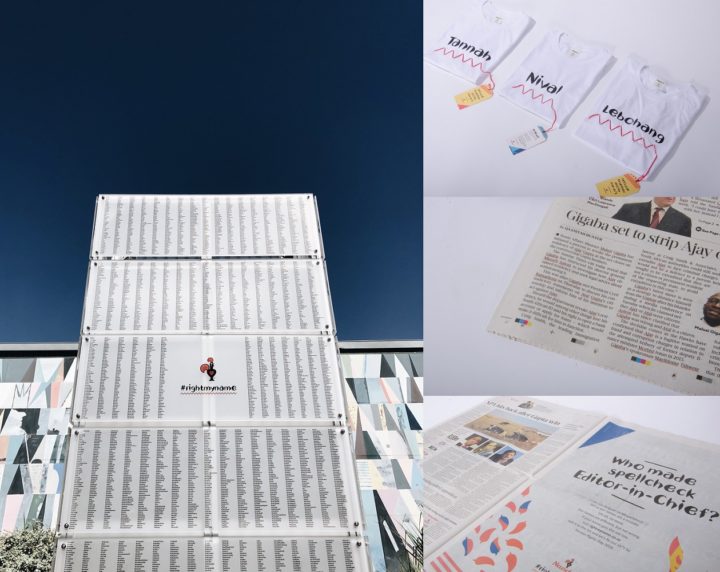 #rightmyname is a big campaign, with a simple goal — to remove spellcheck’s red line from all of our non-traditional English names. The idea was simple. Nando’s would crowdsource a list of names from across southern Africa, build a new dictionary that people could download on SA’s Human Rights Day, 21 March 2018 — and remove the red line from under their names for good.

The campaign kicked off internally, with every employee encouraged to add their name to the #rightmyname dictionary and share the message with their friends and family via social media. It didn’t take long for the conversation to catch fire on social media. Members of the public added their name to the list at rightmyname.com and shared their stories of how spellcheck had butchered their name. It was clear that the line had everyone seeing red.

Just as the conversation was reaching its peak, Nando’s launched an innovative social media influencer campaign that targeted celebrities who’d themselves received a red line under their name. In the leadup to Human Rights Day, these influencers each received a custom t-shirt with their name underlined in red thread. The call-to-action was simple: share a video of yourself removing the red line from under your name and help us remove the red line today.

This removal was always going to be a collaborative effort between Nando’s and the people and so, when an opportunity to partner with the Sunday Times presented itself, the brand jumped at it. On the Sunday before Human Rights Day, the sunday newspaper underlined each and every non-traditional English name, on front and inside covers, in red. It was a South African-media first and whipped up quite a debate on social media.

Overall, it was an extremely collaborative project as almost 80% of the people who worked on the campaign gets the red line under their name and so everyone, from production to community managers, wanted to get on board to get this working for all South Africans.

Every Human Rights Day weekend. a massive festival is held at Constitution Hill, the spiritual home of SA’s Constitution and a site of great cultural significance. Nando’s was given space at the festival to unveil a wall of the 70 000+ names that’d been gathered in the course of the campaign. Festival-goers were able to walk past the installation and find their names printed on it, now with no red line attached.

It’s only appropriate that the campaign has come full circle, with the wall returning to Chickenland Headquarters after the festival. The brand intends to keep it there as a reminder of what can happen when South Africans of all walks of life get together and fix our sh*t.

But the work of #rightmyname doesn’t stop at South African names; Nando’s has been rolling out the campaign across all regions where it has a presence and people in Zambia and Botswana have already begun removing the red line from under their names with lists of their own.