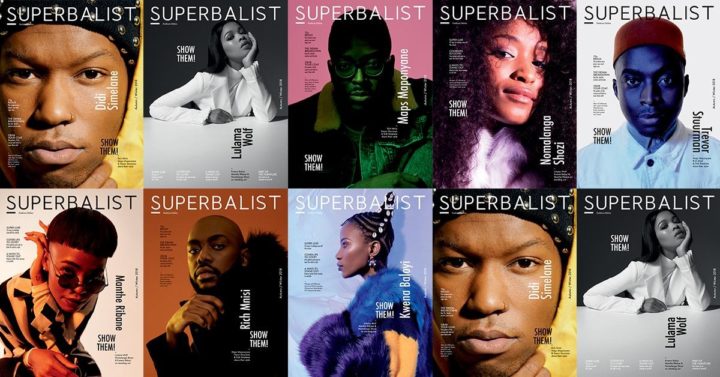 The oft-quoted phrase, “know thyself” (ironically connected to Socrates, one of the fathers of Western philosophy), comes to mind with the latest iteration of Superbalist’s magazine. So, too, what does it mean to be Afrocentric? It’s a layered question, littered with many clichés and plagued by so many stereotypes, but one would think that it has something to do with ‘the new’ within, the future of African identities, and the continued evolution of African forms of representation. The autumn/winter 2018 edition of Superbalist magazine (previously called The Way of Us) certainly makes a good attempt to formulate a resolution to these thoughts.

Motivated by the expression “show them!” and personified by a selection of South African style icons, this issue comprises eight covers in all. Using the same dual-cover format as previous issues, one side dedicated to women and the other side to men, the eight brand ambassadors — Maps Maponyane, Nomalanga Shozi, Trevor Stuurman, Kwena Baloyi, Rich Mnisi, Manthe Ribane, Didi Simelane and Lulama Wolf — were selected due the way in which they have respectively mastered their personal image, literally wearing their identity while effectively representing their values and not losing sight of who they are. A few common traits connect these tastemakers: a belief that one should never limit oneself and an innate pride in Africa, and all convey their personalities through fashion. All this speaks nicely into Superbalist’s brand purpose and message, to boot.

Ultimately, the story that each cover tells comes full circle: all eight fashionistas are Afrocentric-storytellers. Among other things, the question of identity and representation is arguably a question of knowing oneself, taking risks, rebelling against establishment, challenging history, and advancing towards a distinctive African future. 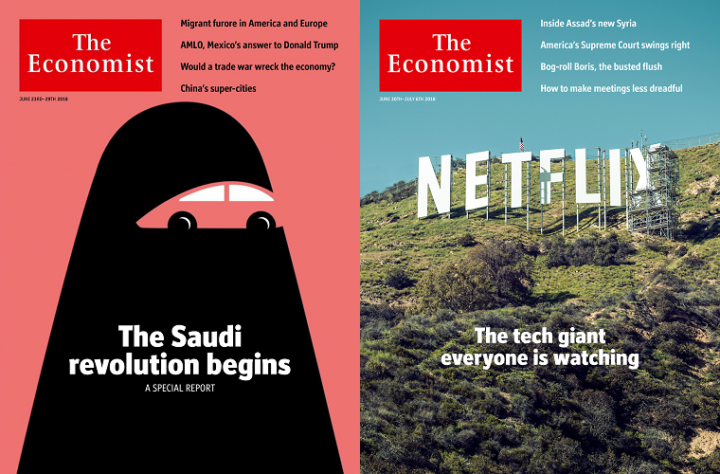 The Economist has delivered two noteworthy covers over the past few weeks. The most-recent issue parodies a familiar view of Hollywood, broadcasting to the filmmaking industry that it needs to take Netflix seriously. In one well-manipulated photograph, Hollywood needs to keep a close eye on this technology giant that has rapidly become a household name. The flipside to this argument is, as the cover headline, suggests: “Can Netflix please investors and still avoid the techlash?”

Muhammad bin Salman, the crown prince of Saudi Arabia, is the subject of the cover for the previous week’s Economist. Media and tech-savvy, Bin Salman is hailed as the man who will succeed in transforming the Arab and Islamic world, and finally open the region to the rest of the globe. As the headline states, “The Saudi revolution begins” — a tall order, given Bin Salman’s penchant for autocratic rule. Nonetheless, he’s instituted some radical reforms that are altering the Gulf region, depicted on the cover by Israeli illustrator and graphic designer, Noma Bar. With its clever play of positive and negative space, and grasp of gestalt practices, the cover illustration references Bin Salman’s most-recent policy of allowing women the right to drive a car. It speaks for itself. 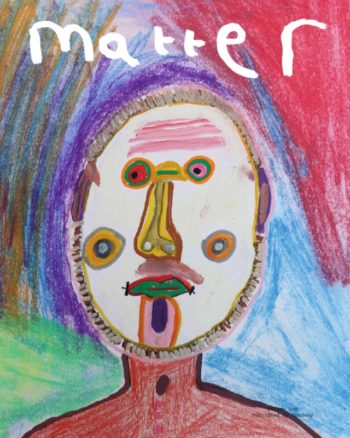 We all perceive reality in our own unique way and experience things differently; something that should unite and not separate us. This isn’t a question of who’s inside and who’s outside the bounds of accepted norms. Art brut emphasised this point. Instigated by French painter, Jean Dubuffet, who saw fine art as dominated by academia and stale traditions, Art brut was commonly attached to terms such as “outsider art”, “naïve art”, “low art”, and “raw art”. It supported art that would have ordinarily been understood as crude or obscene by the establishment and traditional standards. As such, Dubuffet embraced the art of the mentally ill, the ‘naïve’ or ‘primitive’, prisoners, and children, including graffiti and the like. It advocated that these forms of representation were unadulterated and the purest form of human nature and creative expression, unhindered by convention.

Matter is a new culture magazine that shares a similar vision to that of Dubuffet and art brut, celebrating the things that make us different though contemporary literature, art, music, food, and philosophy. Published by Headway East London in support of Action for Brain Injury Week (14–20 May), this first issue investigates living with brain injury, generating awareness about the frequency of this issue. As a collaborative undertaking, contributors to the magazine are all members of Headway, all affected by brain injury in some way, all survivors sharing their experiences through new creative faculties that have been cultivated at Headway, not forgetting the individual challenges that still exist. The cover artwork, signed Jason’s, could weirdly be compared to market-related futures in the line of succession from Dubuffet and George Grosz to Willem de Kooning and Karel Appel to Robert Hodgins and Georgina Gratrix, and the like. 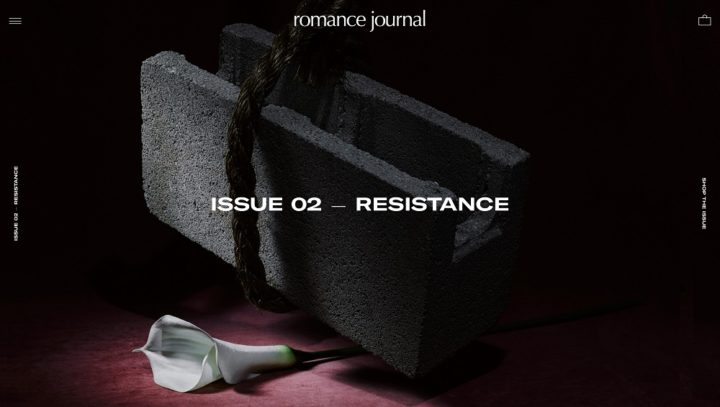 For millennia, truth has been one of the core branches of western philosophy. In his historic Socratic dialogue, The Republic, Plato used the allegory of the cave, which described a dark cave-like space filled with chained prisoners, portraying in abstract terms consciousness and human nature. The ‘truth’ for these prisoners is literally the shadows that they project upon the walls of the cave, caused by a distant light source at the entrance to the cave, out of the prisoners’ sight. The prisoners couldn’t see the truth beyond their perception of their own shadows. Roughly 2266 years later, in his book Beyond Good and Evil, Nietzsche responded: “With all your love for truth, you have forced yourselves so long, so persistently, and with such hypnotic rigidity to see nature falsely…”, after declaring that “Christianity is Platonism for the masses”. Aside from truth most commonly stemming from the perspective of western patriarchal power structures, on many different plateaus and multiple layers it’s a challenging metaphysical and existential subject to tackle. Romance Journal is a publication that attempts to discover what truth is today and, in turn. tries to nurture a greater sense of consciousness within its readership. Each issue has a theme that is explored from the perspective of 10 influential creative women, all ‘woke’ and backed up by personal raisons d’être.

Truth’s relation to resistance is the theme for the second issue of Romance Journal. Perhaps the human urge to explore, ‘our’ innate curiosity, and our pursuit of ‘truth’ might not exist if it weren’t for the will to resist institutionalised truths. In this context, feminism is resistance to patriarchal truths, ulterior to established narratives. The printed version of Romance Journal is tasteful and visually striking, but the website can’t be overlooked for its succinct design approach. Mirroring the art direction and photography of its print sibling, the site exhibits a sense of style through its unorthodox typographic pairings, discreet interactive elements, and bold and offbeat colour contrasts, alongside a neat contributor list that features portraits of all the female creatives on hover of their respective names. Not to mention the thought-provoking video content. 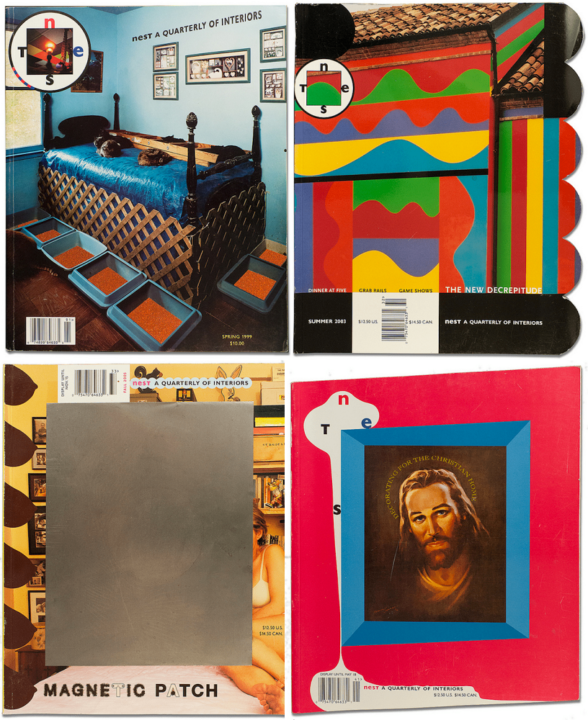 Published by eccentric designer Joseph Holtzman, Nest was an anti-materialist interiors magazine critical of superficial, trendy, and consumer-driven design. The magazine featured non-traditional, non-conformist interiors complimented by elaborate production methods in relation to its design, with extremely experimental formats and spreads. The tactility of Nest — its unusual physical dimensions, unexpected shapes and surfaces, and experimental printing techniques — was a real selling point, produced to match the often-bizarre contents inside, which included stories about the room of a 40-year-old diaper fetishist, the storehouse of Napoleon’s penis, the accommodations of Navy seamen, a man who lived and worked in a tiny cell space, and a photo-essay about living in an igloo, among a plethora of other intriguing features.

Nest was published as a quarterly between 1997 and 2004, with a total of 26 issues printed before its demise. Based in the Upper East Side, New York City, Nest avoided the conventional appeal of the regular glossy and luxurious interiors magazines. It wasn’t a magazine that embraced white space, filling as much real estate on each page as possible, and covering every spread with juxtaposed imagery, type, colour, texture and pattern. Wallpapers and textiles were often used as backgrounds, and decorative typefaces were favored above more-tasteful, considered typographic pairings.

Nest was anarchic and maximalist, rather than minimalist, but this didn’t mean it lacked a significant design sensibility. Layouts complemented production processes and printing methods, all connected in some way to the stories inside. Covers were flamboyant and often ornamental, almost baroque or rococo-esque, featuring die-cut rounded corners, wavy edges, obtuse angles, irregular shapes and other unconventional, asymmetrical design elements. As a result, Nest has become a rare and collectable publication.

The demise of the magazine is rumored to have been caused by Holtzman’s depleting inheritance, which he used to publish the magazine, coupled with a loss of motivation to keep the publication in print. Bizarre and eccentric to the end.