by Jeff Harvey (@JefferyMess) & Glenn Jeffery (@GlennJeffery2) We two 40-year-old Cannes Lions virgins from Grey South Africa have teamed up with MarkLives to provide a wide-eyed, slightly sweaty and not-entirely innocent take on the 2018 Cannes Lions International Festival of Creativity. Follow us right here on MarkLives, and on Twitter and Instagram using #GlennJefferyHarvey.

We did it! Glenn and I popped our cherries. And it was fireworks. Literally. The closing party climaxed with a pyrotechnical extravaganza. It was big, bold, colourful and spectacular. Just like the festival itself. At the party, I met Robert Downey Jr. Well, his lookalike at least, or, as I like to call him, Phoney Stark. We also hopped over to the South African party and then, of course, ended up at the Gutter Bar. Again. Apparently, this blog is getting some traction. I said “Howzit” to an old colleague, Liam Wielopolski (DDB ECD), and his wife asked if she could be mentioned in the report. Voila, Nicola! 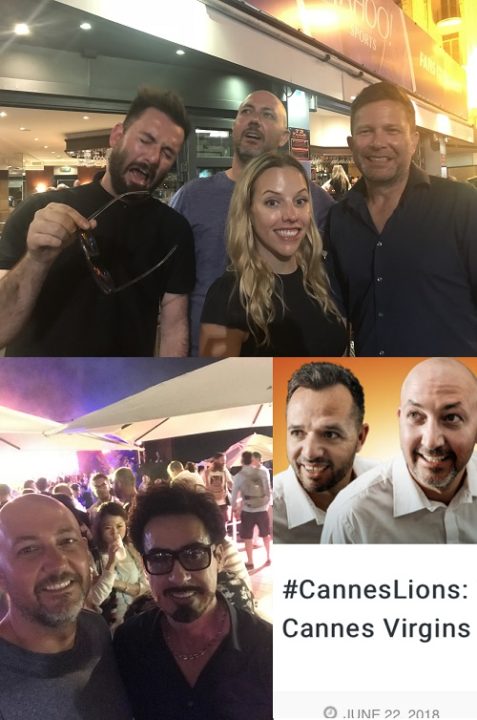 On Friday, I saw a few of the Parkland survivors speak. It was sad and harrowing to hear them recount acts of hate that ended the lives of many of their friends on what is typically a day of love, 14 February. It was impressive, however, to see such young people taking brave but practical and considered approaches to ending gun violence.

After killing time with the cheesy tourist train around Cannes, I met with Glenn for the final ceremony and the big, fat sexy awards of the final night. The “It’s a Tide Ad” campaign won the highly deserved Titanium and Grand Prix for Film. By turning almost all advertising into an ad for Tide, it’s got legs for days. Did you notice how white the 40-Year-Old Cannes-Virgins shirts are? Sorry, this blog’s a Tide ad.

I asked Ryan McManus (Native VML CCO) what he felt the trends were this year. He felt it was “humanity” but in a much-deeper way than just social responsibility. And I’d agree. If you look at concepts such as Apple Today, one of the big winners, much of it re-establishes communities in a real physical space. He suggested that, maybe because technology such as AI is questioning what it means to be human, we’re becoming more in touch with our own humanity and our connections to one another.

Anyway, I’m off to Nice for a week to experience more of this fantastic French culture.

Shout out to Glenn for taking the photos, and being an all-round good sport. And thanks to Herman Manson here at MarkLives.com for sharing his platform. Au revoir from Cannes. 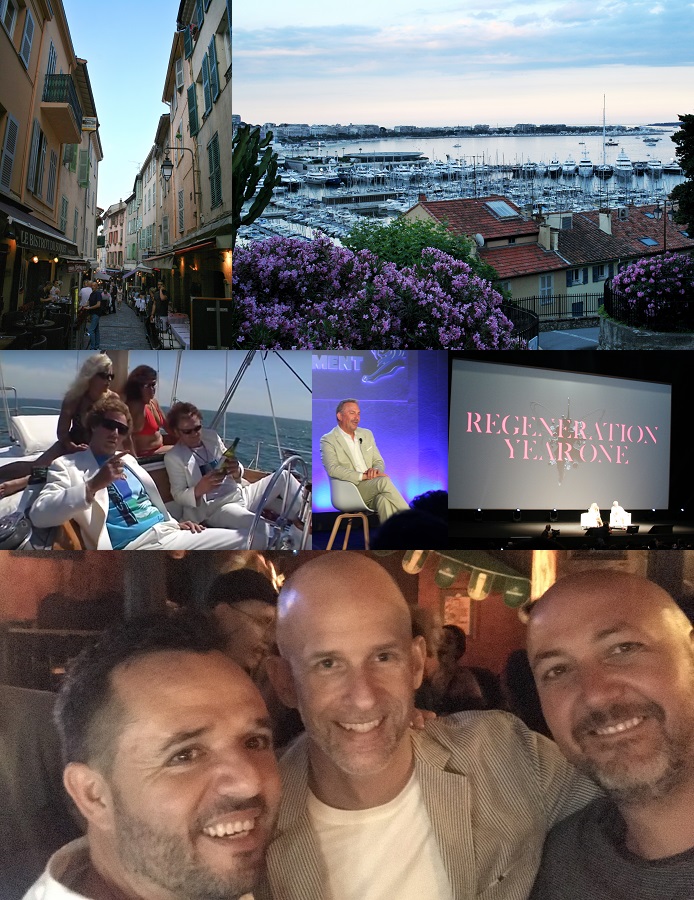 Glenn and I attended the Grey jol at Morrison’s Irish Pub last night and met some fellow mad men and women from all over the world. With 60 Lions so far from across the network, Grey’s sporting enough metal to sink a yacht. Speaking of which, we boarded the Shutterstock boat yesterday afternoon to enjoy a glass or three of rosé. Fancy.

This is becoming less chronological than Pulp Fiction, but yesterday morning we went to listen to some director called Ridley Scott. He was introducing the Saatchi & Saatchi New Directors’ Showcase. I now understand why it’s a highlight of the festival.

In the afternoon, we caught a talk by some Kevin Costner guy. The Bodyguard chatted to us about his new TV series called Yellowstone about modern-day ranching and land rights in the Midwest. It feels close to home with our own land redistribution issues. And looks way better than Waterworld. But, seriously, like most of the characters he plays, he’s a genuine good guy. And he sure can tell a story.

We also met up with the South African ad fraternity at Cannes for a photo op in front of the Palais, followed by a romantic dinner with Glenn at Le Marais to experience more of the mind-blowing local cuisine. Au revoir for now. 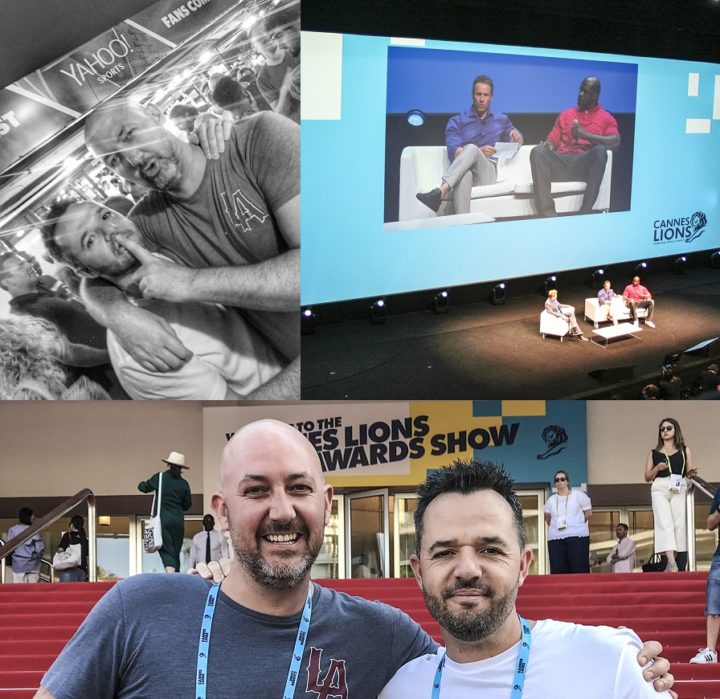 Your first time can be painful. It certainly was on Tuesday night after we failed to pick up metal. We all had such high hopes, especially after last year’s Campaign Gold in Radio for Duracell. That would have been the fairy-tale ending to this whole experience. But, after an hour or two of grumbling to Glenn, some red wine and pasta, and a return to The Gutter Bar, I lay in bed and did some thinking. If this were a movie or really long ad, this is how the script should go. If the success comes too easy, there’s no fight, no drama, no challenge. I don’t want to be a one-hit wonder, or a flash in the pan but, when we tame a Lion again, the victory will taste all the sweeter for having been so close this time. Now, I’m more fired up than ever. Not to be dramatic, but it feels a little like this…

After a swim in the Med on Wednesday morning and ready to drown in inspiration, we went to more talks yesterday, one of them by James Marsh — the Academy Award-winning director of The Theory of Everything. Every morning before work, he passes a gallery and sits in front of a different painting and looks at it for a full hour. It’s his nourishment, his creative breakfast. And I think that’s so important for any of us.

We also saw CNN news anchor, Chris Cuomo, interview the enormous Shaquille O’Neill and hilarious Conan O’Brien on their personal branding. I think a lot of clients can learn from Conan’s approach of just doing comedy and not being too prescriptive and precious over their brands. For example, he did a bit for Taco Bell where he takes a bite of a taco and asked how it is. He fakes a seizure but then says, “It’s pretty good.” Many brands would shy away from portraying their product in a bad light but it shows they have a sense of humour, making them more likeable. Shaq and Conan also say don’t try to go viral, just be funny. If it’s funny enough, it will probably go viral anyway. It’s a bit like chasing awards. Rather do great work that you’re passionate about and the awards will probably follow. And without too much pain.

Our first official soirée was the Cannes opening party on Monday night. We met up with a few guys from Hunts and I bumped into a friend the from ’90s. Glenn also met up with an old friend from school who’s now ECD at TBWA\Singapore. It’s funny how sometimes you have to go halfway around the world to meet someone from your own backyard. I also partied up a storm with the inimitable Shane Forbes AKA Shooter Shane. After the opening party, we stumbled over to the infamous Gutter Bar. Doing a little time there is a rite of passage for Cannes virgins. It’s like a rave crammed into a café, so naturally the patrons were spilling into the street, spilling their drinks into the street.

After a bit of a sleep-in on Tuesday morning, I ventured back to the Palais to meet up with Glenn. We caught a talk about YouTube Music by Lyor Cohen, YouTube and Google global head of music. He was instrumental in the success of Run DMC, Beastie Boys, The Killers and many others. One of the things I took from it is that YouTube Music is enabling the return of the impresario. Don’t worry, I also had to look it up. It’s basically an artist manager or promoter. With YouTube Music, we’ll see people finding unknown but talented musicians and making them famous.

We also went to a talk by the people who came to Cannes to tell us why they’re not at Cannes to a group of people wondering why they’re not at Cannes watching them at the main stage at Cannes. Yes, it was the folks from Publicis talking about their AI Marcel project. They took 20 questions on video from industry heavyweights, which they answered convincingly, on the whole. The idea is, it’s meant to be an easier way for people across the Publicis network to collaborate. It doesn’t come up with ads, though. 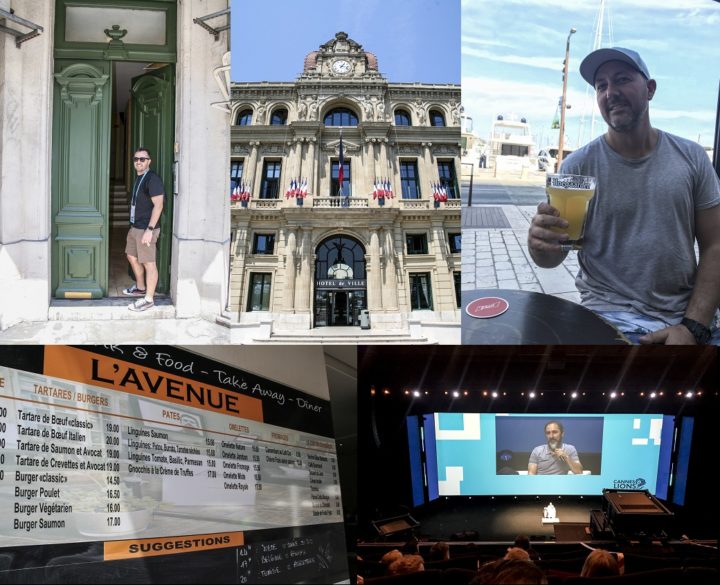 Bonjour! Glenn and I arrived in Cannes yesterday just in time to watch Brazilians be defeated by Mexicans in an Irish pub with some South African friends where we heard British, Italian, German, Spanish and American accents. This place is definitely cosmopolitan but undeniably French. It oozes class. And money. As we turned our first alley to find the pub, we were greeted by the sight of a dock filled with flashy yachts and then a red Ferrari drove by. Cannes is for ballers. Our first two beers cost R240.

You also need to be walking fit for this place. Well, at least from our Airbnb. I already have a blister. It was, however, worth the walk this morning to see David Droga. He’s an advertising god, yet so down to earth. We also saw an inspirational talk by the Brazilian Burger King team on hacking advertising.

Also, we got a finalist for Duracell radio, so we’ll see tomorrow if it converts to metal. Au revoir. 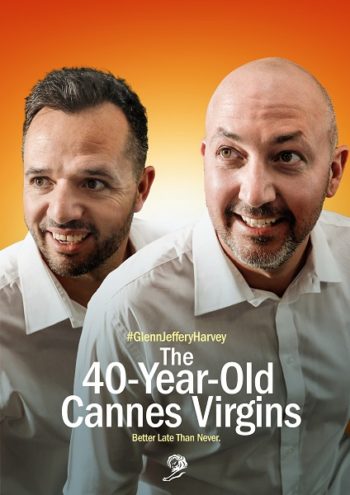 Born in Durban, raised in Joburg and seasoned in adland, Jeff Harvey (@JefferyMess) has a fetish for fresh ideas and clear, clever writing. After meeting a copywriter while studying business science at UCT, he got an itch for ads that only an internship at King James could scratch. Since then, he’s worked at Saatchi & Saatchi, Havas, Switch and Grey. With over a decade’s experience as a copywriter, he’s snared numerous awards, including a D&AD Pencil, Gold Cannes Lion and Gold Loerie.

After starting his career in Joburg as a designer, Glenn Jeffery (@GlennJeffery2) made a move to London, where he spent 104 weekends seeing as much of the world as possible. London also persuaded him to get into advertising. Upon returning to South Africa, he worked at Volcano and Grey South Africa on numerous global brands, winning some awards along the way. Glenn is executive creative director of Grey.

Leave a Reply to Edward Click here to cancel reply.

One Response to “#CannesLions: The 40-year-old Cannes Virgins report”