Short-term financial lender, Wonga Finance South Africa, has launched an ATL campaign introducing its new instalment loan product in a continuation of Wonga’s “It’s never just a loan, is it?” campaign, which kicked off the brand’s repositioning strategy in 2016.

Taryn Schmidt, Wonga SA head of marketing and communication, says the ad was inspired by unscripted customer testimonials on what they’d recently used Wonga loans to achieve: “The brief to Black River F.C. was to create a campaign that would highlight that Wonga’s new Flexi Loans is more than a provider of easily accessible short-term loans but rather a company invested in its customers and their financial wellbeing.”

The TVC, directed by Darling Films’ Jono Hall, is based on the insight that some things are hard to pay back — a gesture, family support or an act of kindness are just some examples.

“We used this premise to tell stories of people who wanted to show their appreciation for others who helped them throughout their lives, and how a loan from Wonga enabled them to do so. What sets us apart from our competitors is simple: ‘empathy’. Understanding what customers’ aspirations are, and what lies beneath those, is imperative for storytelling that cuts through.”

The campaign launched digitally and on TV in March 2018.

Out of home (OOH) advertising agency, In Touch Media, has rebranded after switching to an advertising agency model two years ago, sporting a fresher, more-modern corporate image and including a sustainability message in the new look. 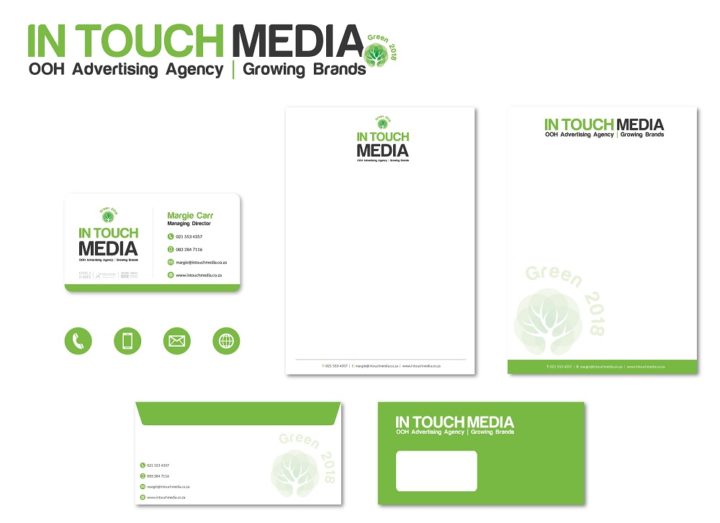 Says Margie Carr, In Touch Media managing director, “Now that we are a fully-fledged agency, having spent the past two years adapting to the changeover, we thought that it was the perfect time to reposition ourselves. Along with the tree in our branding, we conceptualised the slogan ‘Growing Brands’ and decided that it would be nice to give back to the environment at the same time and leave a living legacy for each new client campaign we sign up during the year.”

Taking the lead from the eco-friendly influence and colour palette of its new CI, Carr has pledged to support the South African Reforestation Trust by purchasing a tree for each signed media schedule received this year (01/03/2018 to 28/02/2019).

Designed by Maxine Montgomery of One Creative Design, the new CI was inspired by the in-house team who believe that, as a specialist agency contributing to the growth of brands and the industry, they needed to reflect this in their own branding and corporate communication.

Montgomery says: “The brief was to create something young, fresh and modern, with an eco-conscious edge, which is where the colours come in. The light green stands out and brings a refreshing and energetic feel to the branding while the grey brings in some balance and authority. “The ‘Green 2018’ tree stamp on the logo was inspired from the support of In Touch Media to the South African Reforestation Trust by purchasing a tree for each signed media schedule.”

These trees will be planted at the Women Presidents’ Organisation (WPO) Plant a Forest site on the Klein River Cheese Farm near Stanford in the Western Cape, which forms part of the SA Reforestation Trust’s mission to enhance the biodiversity in areas of the Cape.

Cadbury Dairy Milk Bubbly is encouraging fans to #GetBubblified with the launch of its new lighthearted TVC and playful product packaging.

The Bubbly commercial captures a moment in an elevator between a young man and woman. As in most elevator rides, there is an awkward tension in the air with the strangers standing in silence, waiting to reach their destination. The woman then rummages through her handbag for something to save her — pulling out a bar of Cadbury Dairy Milk Bubbly. She breaks off a piece and pops it into her mouth; her cheeks puff up and she lets out a loud ‘boooom psssht’ as she starts beatboxing. She then shares a piece with the guy, who follows suit.

The commercial also introduces its audience to the new packaging, which builds on the brand’s on-shelf differentiation.