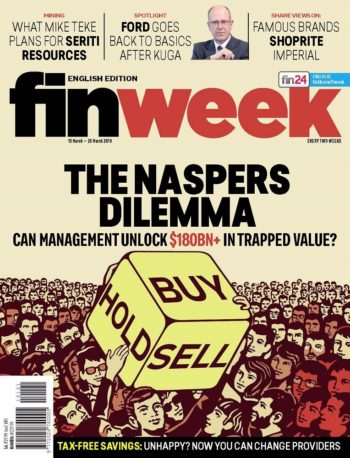 Illustration is a powerful narrative devise to use in magazine-cover design, on par with the power of typography, with many of the most-influential publications in the world (such as The New Yorker and Der Spiegel ) using the discipline as the foundation for all their covers. Finweek is one local publication that is increasingly taking the cue from international trends in cover design, observing the gravitas of good illustration on a magazine cover.

The cover to the 15–28 March edition illustrates in a simple and single-minded manner how analysts are finding themselves on the fence regarding the future of media and ecommerce company Naspers. From one angle, the company maintains growth potential; from another, there are many issues that suggest investment in the company as a very-risky option. A throw of the dice, nonetheless — one that will affect the lives of many people. 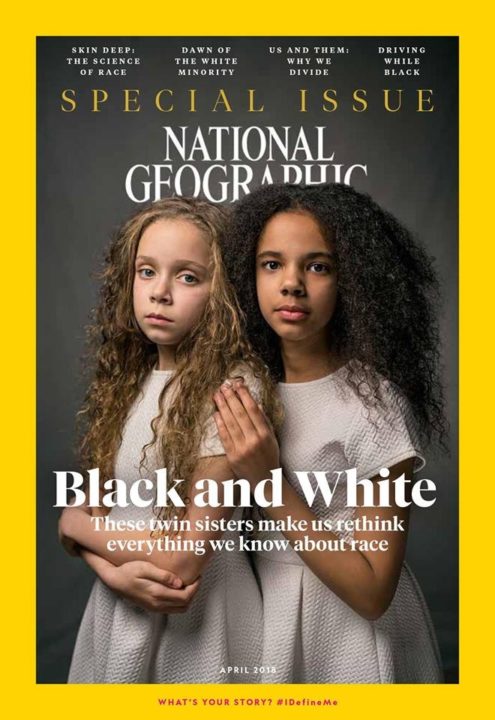 Last week, Colors magazine took the stage as the featured iconic publication. An important point to draw from that piece was the notion of pluralism within an internationalist worldview, where people’s differences need to be embraced as unifying factors and with the understanding that diversity is a common denominator that should bind people across the globe. In short, difference should not divide; it should unify. There is a distinction to be made here between sameness (which falls within the realms of fraternity) and equality (which veers towards liberty).

In light of these sentiments, the April 2018 issue of National Geographic focuses on perhaps the most-divisive issue today: the subject of race. The cover features twin sisters, one ‘black’ and the other ‘white’. The portrait is fetching, challenging the way that we understand the idea of race. It has been found that there is no scientific evidence that race should divide us; it is largely a social construct engineered to separate us, and make people think in terms of “us and them”. In a world where communication networks are becoming increasingly ubiquitous and where information and connectivity are vital empowering factors that may easily be hampered by social divides, segregation is a brand of tribalism that is severely outdated and at odds with the overall wellbeing of human beings across the planet.

There are some interesting reads inside the magazine as well, including the article on the twins, an investigation into historically black tertiary education institutions, and an examination of anxiety that African-Americans experience as police always single individuals out over other ethnic groups.

Spotlight on the past 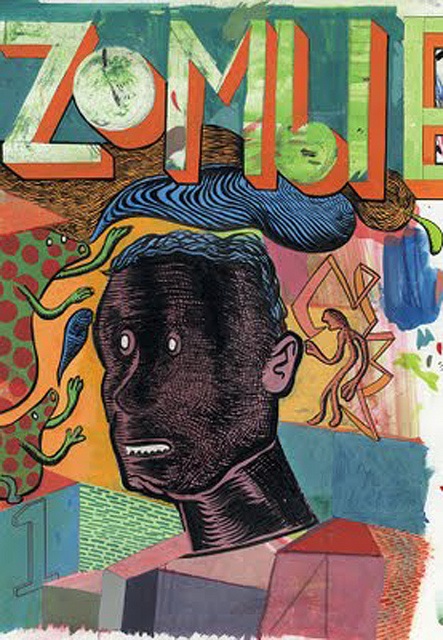 Zombie was a strip magazine created and edited by Mark Kannemeyer (also known as Lorcan White), one of South Africa’s most-underrated and prolific artists who is often confused with his equally prolific brother, artist Anton Kannemeyer (of Bitterkomix fame). Published with contributions from students at Open Window School of Visual Communication in Pretoria, the mantra of this zine is as follows: “Zombie is not art, it’s absurd. It is its own kind of underground” (translated from the original Afrikaans). Only one issue was published, and included some influential local illustrators and artists, such as Heine Coetzee (aka Elbowgrease), Nicolene Louw, Norman Catherine, Jonah Sack, Johan de Lange (aka Joh Del, not related), and Black Koki. Although most publications of this kind don’t tend to last very long in print in South Africa, they do in many cases become important historical documents. This is a call to action: more Zombies are required — let’s produce more culture and make history.

Hailing back to the esoteric aesthetic of 1960s underground-hippie magazines such as Gandalf’s Garden, and arguably inspired by Victorian arts and crafts publications such as The Century Guild’s Hobby Horse, Fiddler’s Green is a bohemian bricolage of folklore and sub-cultural simulacra. Curious and mesmerising, the magazine’s strapline says it all: “Art and Magic for Tea Drinking Anarchists, Convivial Conjurors & Closeted Optimists”. Peculiarity being the essence of the publication, the title Fiddler’s Green is a reference a 19th century vision of the afterlife, especially in maritime folklore, founded upon everlasting joy, where a happy fiddle continuously plays for dancers with inexhaustible enthusiasm.

The magazine depends on donations to stay in print, and hence is produced sporadically. Published June 2017, the fourth issue of Fiddler’s Green is themed “Crown & Crossroads”and is accented with beautiful design considerations, such as the gold foiling of the masthead and a Pre-Raphaelite-esque cover illustration by Timothy Renner, advocating an olde-worlde feel. This tone is continued with article titles such as “Gettin’ On Okay: Self-Reliance and the Witch”, and “The Ring of Truth: The Casting and Use of the Magic Circle. The world needs more of this brand of circus freakery. 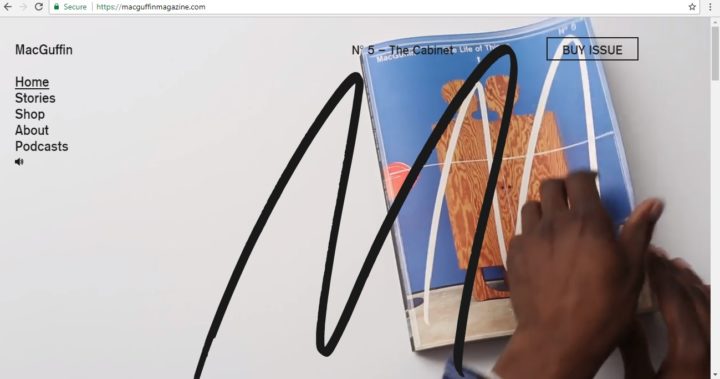 MacGuffin is a print magazine focused on design and crafts, with an online iteration that is as impressive as its real-world presence. The website is accessible and easy to use, and easy on the eye, especially with its intuitive mix of horizontal and vertical navigation. Each edition places emphasis on one single object, particularly ones that are underappreciated, taken-for-granted, or disregarded. With a design sensibility that would rival the most-tasteful platforms out there, #5 delves into the everyday life of the humble cabinet, featuring works by iconic designers such as Ettore Sottsass, William Graatsma, and Wolfgang Tillmans, to name a few. Produced biannually, MacGuffin sets an impressive standard for storytelling about seemingly banal and mundane things, revealing the often-unobserved, intimate relationships people have with the objects that surround them and staying true to the publication’s strapline, “The Life of Things”. 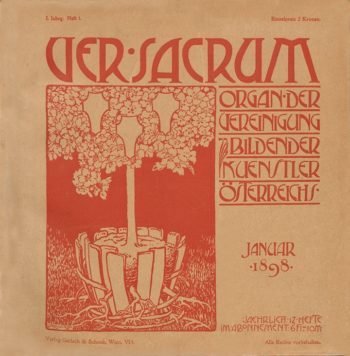 Latin for “Sacred Spring”, Ver Sacrum was one of the earliest avant-garde magazines to exist and set a precedent for magazine design to come. The first issue was published in 1898, an offshoot of the prolific Vienna Secession, loosely associated with art nouveau exponents in France and inspired by the approach of the Arts and Crafts movement in England (of which Hobby Horse, mentioned earlier, was an early printed manifestation). Every issue of Ver Sacrum was dedicated to a specific artist, who doubled as the editor and designer; Gustav Klimt, Alphonse Mucha, Fernand Khnopff, Joseph Hoffman and Joseph Olbrich were only some of the prominent names

The cover of the first issue is decorated with a stylised illustration of a potted tree, roots bursting from the confines its barrel. This was meant to be symbolic of the anti-establishment position that the Vienna Secessionists had identified themselves with, introducing their proto-modernist vision to an ever-growing cosmopolitan public. True to their name, they declared: “We have dedicated ourselves with our whole power and future hopes, with everything that we are to the Sacred Springtime”.

Utopian and idealistic in typical early modernist fashion, Ver Sacrum was an ode to the archetypal idea of youth, rebellious and free, similar in perspective to a parallel movement of the time called Jugendstil. All of this blended with a modernist obsession with progress, the future and anything new, and a focus on all the arts, including fine arts, poetry, design, architecture, music, theater and the like. The magazine had a square format which allowed for inventive and unorthodox layouts for the time, including the use of multiple columns, decorative borders, and an embrace of negative space — a precursor to the late-modernist grid system still used today.

Ver Sacrum ended print in 1903, due to a degradation in quality thanks to an increase in supply from 12 to 24 issues per year. Demand slumped and funds simply ran dry in the process of choosing quantity over quality.