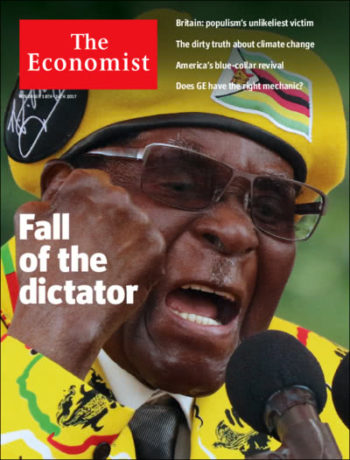 The issue of the Economist seems to be one of the earliest covers to comment on the historic events that have unfolded in Zimbabwe over the past couple of weeks, leading to the fall of one of the most-publicised and -infamous dictatorships in Africa. So, Robert Mugabe is gone, brought about by what seems to be a well-planned, yet (mostly) peaceful, coup d’état that the Zimbabwean military denies being a coup. And with Mugabe’s departure so, too, his reign of tyranny — or so we hope as his ruling party, Zanu-PF, still governs the country. 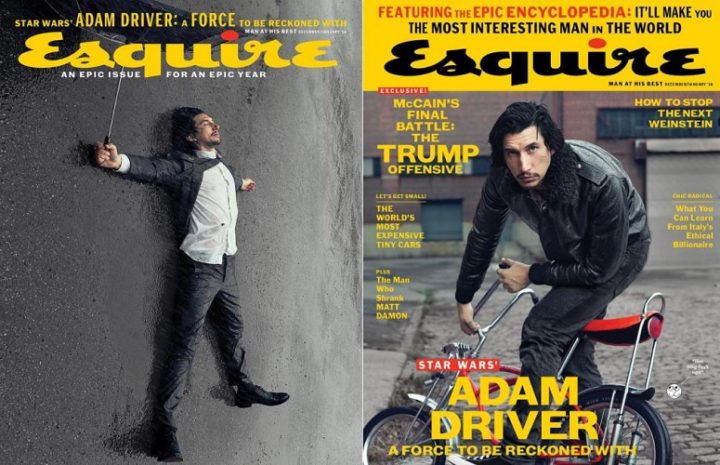 An icon of Americana, Esquire is an establishment defining the zeitgeist of America at any given time, particularly within the context of its predominantly male audience. The cover to the December/January issue does so in stellar fashion, clearly referencing classic boxing posters from the ’50s and ’60s, muscle-car branding and advertising, antique hand-lettered signage from old city corner shops, barbershops, diners, cinemas, and industrial/dockside areas — all that presents the American “man at his best”.

If the archetypal, vernacular design and art direction of the cover doesn’t give one a taste for the classic American man, Esquire goes one step further, showcasing another American icon: Star Wars. The cover photograph doesn’t resort to the obvious or the literal when it comes to Star Wars but rather presents actor, Adam Driver, otherwise known as the chief villain, Kylo Ren, in the latest Star Wars sequel, Episode VIII: The Last Jedi (he also previously acted as Kylo Ren in Episode VII: The Force Awakens). This portrait was taken by Norman Jean Roy, known for his work for Vanity Fair, GQ, Vogue, Rolling Stone and Harper’s Bazaar, among other well-established publications.

Driver is truly “a force to be reckoned with”, having landed one of the biggest roles that an actor could hope to ask for in Hollywood. Who else could say that he played the son of Han Solo and Leia Organa, and that he is Luke Skywalker’s nephew and Darth Vader’s grandson? How much more epic, iconic, historic or culturally significant may one get? 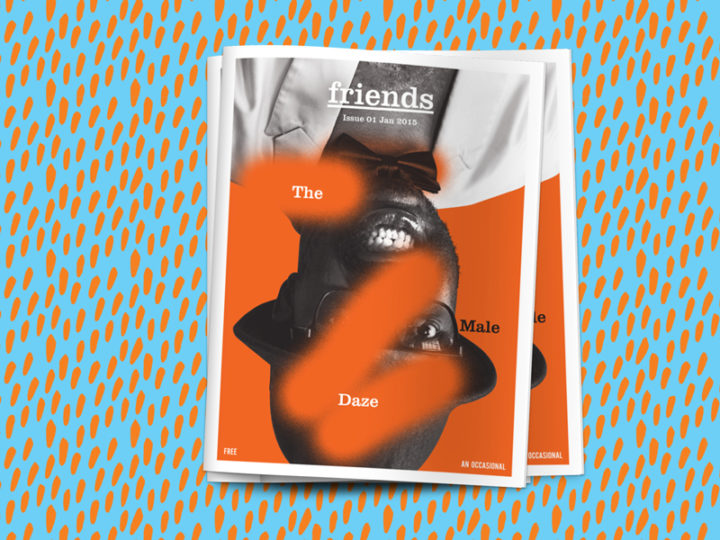 Albeit a small cultural achievement, with only one published issue, this almost-forgotten local crowdfunded magazine is what the South African design community sorely needs more of. Based in Durban, Friends magazine was introduced as “an occasional”, as opposed to a monthly or quarterly, in January 2015, edited and published by Mathew Keiser (founder of Sol-Sol Menswear) and Louis de Villiers (aka Skullboy). Themed “The Male Daze” this first and only issue featured contributors from SA and abroad, with support from some very talented friends, including Richard Hart and Roger Jardine (Disturbance Studio), Alex Lendrum (HypeBeast), Matt Kay and Nick Mulgrew, to name a few. Friends was an attempt to create an accessible, gratis, limited publication, that had no advertising.

Effectively doing away with all superficial and commercial elements, and avoiding surface appearances, Friends delved deeper into the local and international creative community in search of greater substance. This publication exhibits a mastery of visual communication, effectively experimenting with art direction, graphic design, typography, illustration, layout, and photography; the list goes on. We need more of this stuff in SA. 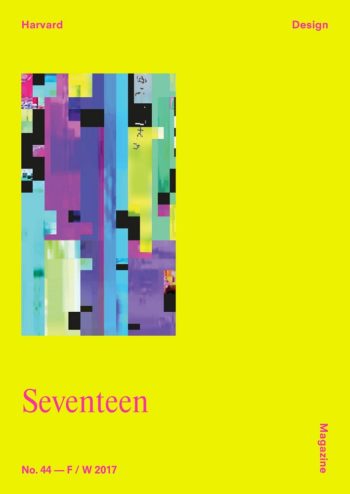 Broadly speaking, the core interrelated parts of art, craft, design and discourse form the bulk of the cultural sphere. An appreciation of each part in relation to the other, in dialogue with a plethora of social, economic, political and historical factors within any given society, arguably makes for a coherent cultural sphere. Harvard Design Magazine (HDM) is a publication that advocates this dialogue, looking further than run-of-the-mill, orthodox happenings within various fields of design and aiming to create discourse that is more-layered, in search of new perspectives. Speaking a language akin to a wholeness-in-design, each issue highlights unexpected avenues from various design fields and connects them, linking seemingly unrelated fields, such as art and science. HDM’s existence is based up dialogue, and building bridges that cross borders between design, human beings, their spaces and places, histories and politics.

The current issue is themed “Seventeen”, which references the year 2017, describing the millennium as teenager presently, divided and temperamental. We can all relate to those teenage years, confused, still figuring out who we are but eager to make our mark on the world. Given all the upheavals around the globe today, much like a teenager, the world is acting on impulse. Young people are key stakeholders within these changes and glitches, and HDM uses this, literally on the cover, as the focus for this issue. The cover recalls early glitch art from the late ’90s, while the magazine’s contents investigate all the evolved narrative blips and design bleeps (technological, social, political, economic et al) that have emerged in the 17-odd years since. Glitch as a positive metaphor, defining our current cultural adolescence.

Surface is a dual online and print magazine that focuses on visual communication and media design from across the globe. Founded in 1993 and based in New York, it covers stories that deal with design discourse, mostly surrounding architecture, art, design, fashion, and the like. Ten issues of the print edition are published annually, with each issue dedicated to a particular theme; the website is more immediate, with regular daily posts, the latest design news, and long-form storytelling. Designed in partnership with the Noë & Associates, both online and print are seamlessly integrated, transitioning with synergy from media to medium. Other iterations of the brand include Design Dialogues and Surface Studios. Setting the bar for the relationship between online and print, Surface is an important voice within the global design community, creating a recognisable balance between style and substance, surface and depth. 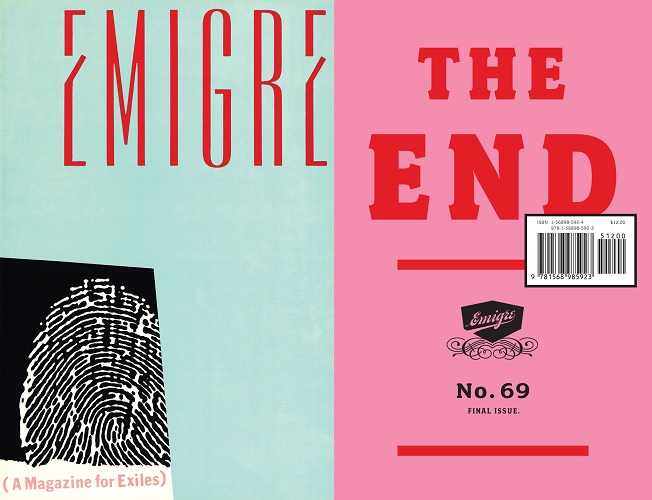 There is a short list of usual suspects when it comes to important, canonical publications within the history of design and visual communication. Emigre is undoubtedly one. Published by the world-famous, influential Emigre digital type foundry, Emigre was one of the earliest magazines of its kind to use Macintosh technology, steering the evolution of graphic design towards desktop publishing as we know it today.

Sporadically published between 1984 and 2005, comprising a total of 69 issues, Emigre focused on all things design related, particularly graphic design, photography, and typography. Using unorthodox layouts, edgy articles, and supported by key players in the design community, such as David Carson, Jonathan Barnbrook, Experimental Jetset, Designers Republic, and Rick Poynor (presently The Eye, Design Observer) to name a few, Emigre became an international space for discourse on, and experimentalism in, design.

Although Emigre often invited guest designers and editors, the magazine was predominantly designed, art directed, and edited by Rudy VanderLans and his wife, Zuzana Licko. Early issues investigated designers who went beyond the borders and accepted norms and with a strong sense of internationalism, using an archetypal postmodern aesthetic influenced by the digital tools of the time that still influences designers today. In later issues, Emigre altered its format drastically, going through no less than five incarnations, which included DVDs and CDs nearing the end of its life. The final six issues of Émigré became a little more conservative and focused on textbook execution, adopting a softcover book format and co-published by Princeton Architectural Press. Themed “The End”, the final issue was published in 2005.