How streaming TV in SA will affect advertising

by Oresti Patricios (@orestaki) Streaming entertainment via the internet is threatening to take over from broadcast media. Services are mushrooming, because recent entries to this marketing are offering home-viewing options at prices that compete well with satellite services. The sector is becoming broader, with something on offer for just about everyone. On top of this, social media services are getting in on the video streaming act. What does this mean for marketers and advertisers?

On 9 August 2017, Facebook announced the launch of Facebook Watch, a new video streaming service that joins a burgeoning rush of digital entertainment offerings worldwide. In the US, the streaming video-on-demand (SVOD) landscape is currently dominated by Netflix, followed by Amazon Prime and Hulu Plus. There have been some recent entrants into this segment; in the US, these include the likes of Disney, Sling TV, HBO Now, and Apple TV. In South Africa, Showmax and ONTAPtv are steadily building subscribers, and global giant Netflix is well into this market. A further option was added in early May, when DEOD launched with a hybrid offering of subscription, pay-per-view, and live streaming options, including sport and news.

Growth in SA (and the rest of Africa) is constrained by bandwidth: people with fast DSL or fibre may best access streaming services. But the internet entertainment giants are getting smarter and learning how to work round areas with bandwidth issues. These days, Netflix is using artificial intelligence (AI) to tweak scenes so they even look good on low-bandwidth connections.

According to research by Marketsandmarkets, “the video streaming software market is expected to grow from US$3.25 Billion in 2017 to US$7.50 Billion by 2022, at a Compound Annual Growth Rate (CAGR) of 18.2%.”

Streaming is growing worldwide. In China, providers such as PPTV, CNTV and Xunlei Kankan are showing a compound annual growth rate of 30%. Between 2015 and 2016, India experienced a 66% year-on-year growth in online video consumption. According to Frost & Sullivan, there were 66m unique over-the-top (OTT) viewers in India, 1.3m of which subscribed to one or other SVOD service. (OTT is a term used to refer to audio, video, and other media transmitted via the internet as a standalone product.)

Growth in many territories is often directly attributable to faster and cheaper smartphone connectivity, with more people accessing online content on their phones and tablets. Now social media giants Facebook and YouTube are bringing out the big guns to take on the incumbents. While YouTube’s main user-base is its free offering, YouTube Red is being offered in certain territories, giving subscribers ad-free, premium content, for US$9.99 per month. It’s still early days for Facebook Watch, but there’s no doubt the friendship site is aiming to woo away some of YouTube’s 1bn viewers.

How do free social media channels turn eyeballs into dollars? YouTube’s revenue model is derived from ads that are played at the beginning of (and sometimes during) videos, as well as non-video ad overlays, based on the Google algorithms that serve ads based on a user’s tracked online habits. Facebook Watch has opted for the equivalent of a conventional, broadcast TV approach by interrupting viewing with ad breaks.

YouTube and Facebook pose a threat, simply because of their subscriber numbers. To put this in perspective, there are over 1.8bn Facebook users worldwide, according to Statista.com; 214 million of these are in the US. The following figures are cited by Forbes:

The market leaders are basing their marketing appeal on original content, as the primary differentiator. This is the strategy that set Netflix up as the market leader in the space, with binge-worthy series such as House of Cards and Orange is the New Black. Budgets for original content are growing, year-on-year. Netflix is reportedly spending US$6bn on original content this year. The company has a market cap in the US$60bn range, which puts it in the same league as media and entertainment giants such as 21st Century Fox and Time Warner.

Amazon Prime has earmarked some US$5bn for original content this year, which, together with its expansion into 200 countries, sets it up as a real challenger to the Netflix crown.

YouTube announced it will buy 40 new original shows for YouTube Red. Some of the familiar faces who have been signed so far include comedian Kevin Hart, talk-show host Ellen DeGeneres and the comedy duo Rhett & Link. YouTube is approaching advertisers such as Johnson & Johnson, which is sponsoring Best.Cover.Ever, a music competition from Ryan Seacrest that’s scheduled for later this year.

Rumours abound regarding Facebook’s content acquisition strategy. According to The Wall Street Journal, the social media brand is seeking to fund original, scripted content, at up to US$3m per half-hour episode. Facebook’s offering will target the youthful age range of 13–34, focusing on 17–30, with a focus on its own versions of popular reality shows such as The Bachelor, sitcoms and dramas. The brief to potential producers is to be strictly middle-of-the-road, with “no political dramas, news [or] shows with nudity and rough language.”

What does this mean for advertisers?

Research done by Hub Entertainment Research in late 2016 found that a majority of users would prefer to have ad-supported TV for free, rather than pay a subscription for ad-free viewing. However, the same research found that most viewers skip ads if they can, and feel that ads that interrupt viewing are an annoyance. This seems to be borne out by the numbers. YouTube Red has signed 1.5m paying subscribers since its October 2015 launch, and another 1m people are on free trials. But the ad-supported user base is around 1bn worldwide, which is some indication of viewers’ preferences.

The Hub researchers made suggestions of alternative advertising strategies that some respondents found more acceptable than the current models. (The figures in brackets refer to the score respondents gave the ideas out of 10.)

Peter Fondulas, principal at Hub, commented in the media release: “Conventional wisdom says that consumers simply don’t like ads on TV. But what our study suggests is that they don’t like the way ads are delivered on TV. What’s especially interesting is that better targeting of ads based on past purchases doesn’t appear to raise major privacy concerns.”

Advertisers much rethink their approach

Advertisers are going to have to rethink their approach when it comes to streaming media. Apart from the strategies mentioned above, brands should consider product placement, sponsorships, and even creating original branded content, as alternatives. 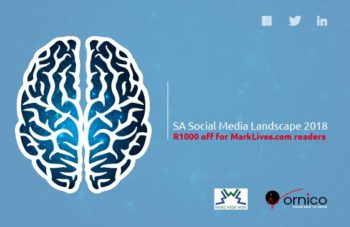 Want to get the lowdown on social media in SA? The South African Social Media Landscape 2018 contains everything brands need to know to successfully navigate social. Marketers, brand owners, public relations professionals, entrepreneurs, agency owners, strategists, CMOs and social media professionals will value this report. Arthur Goldstuck of World Wide Worx and Oresti Patricios of Ornico are offering MarkLives.com readers R1000 off the cover price of the report. Brands who purchase the report will also receive a free month’s subscription to the Ornico Social Media platform. This will give your brand real-time social media monitoring as per your specified requirements and customised insights across social demographics, content, influencers, the key drivers of social conversations and much more.