by Thabang Manyelo (@tipidang) Since that monumental moment took place at the Durban ICC a few nights ago, where I, Thabang “Tipi” Manyelo, was awarded one of the highly coveted Loeries “Young Creative of the Year” awards, two things have happened repeatedly.

The first is that my body keeps reminding and reprimanding me for celebrating as if there’s no tomorrow. Because there was a tomorrow. And that was Tuesday morning. In an office back in Johannesburg, where confetti and tequila had been replaced with reverts and client changes. With every cramp, twinge and throb in my temples, my body said, “Wa Phapha!” [You’re forward! What were you doing?]

The second — and the more surprising thing (to me, anyway) — is that a creative or another member of our industry has been waiting until I have a moment to myself, then slyly pulling me to the side and asking, “So what were you going to say if they had let you speak?” By this, they’re referring to the moments after receiving the award, when I found myself compelled to grab the Loeries microphone and share a thought with the room.

The #WWTS (“What Would Tipi Say”) requests haven’t ended there: WhatsApps, iMessages, Twitter DMs and even the odd LinkedIn request have engulfed my phone to get to the bottom of this industry mystery. So, when MarkLives reached out to me about the matter, I saw it as a timely aid and finally I have a voice and a chance to say my piece. I won’t try to embellish or sweeten the words but rather, word for word, try to recite a speech I have been preparing to share for the past three years (every year before this when I had hoped to win).

“The game now needs you”

“If you’re a student, an intern or what they call a ‘Junior’ creative, do not waste your time and the industry’s time trying to be these people. Their time has passed. The game now needs you. Whoever you are. A young creative to come in and change things! That’s what this award is about.”

I would then have ended off with the ‘mic-drop’ worthy sentence: “Ever since I got into the industry, I have always tried to be Tipi. And now look at Tipidang, age 26, Young Creative. I’m just saying…”

I feel strongly about this sentiment and pray that the future of this industry learns from the past — not to replicate it but, rather, to transform it and transcend to greater heights. 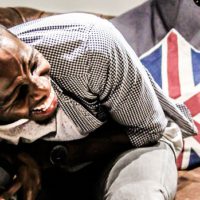 Thabang “Tipi” Manyelo (@tipidang) is one of two winners of the 2017 Loeries Young Creative Award, which recognises the creative performance of individuals aged 27 or younger and includes a prize of R60 000 for each winner. A copywriter at FCB Africa, Tipi is a natural-born storyteller.