by Warren Moss (@warrenmoss) If you’re a B2B marketer, there’s a new favourite kid on the block when it comes to marketing tactics at your disposal: account-based marketing (ABM). So why is it becoming so popular in the industry?

Essentially, ABM is a highly targeted, strategic marketing campaign where the intended target market is a very small pool of people — sometimes even just one person — from a single large organisation. This is in stark contrast to the more-conventional “spray-and-pray” approach of B2C marketing, where campaigns are targeted at thousands, or even hundreds of thousands, of individuals.

So who are these individuals, and why does marketing to them need to be so specific? Identifying them means thinking about the 5-10 companies which would really “move the needle” for your business, if they were your clients. These are the ones who would have a major impact on your brand, whether it’s because of their size, reputation, or the value of the deal involved.

For example, if you’re a major South African bank, landing a small business as a customer won’t be as impactful as landing a large multinational such as SAB. Once you’ve identified these companies, they form the base of your target market.

Once you’ve done the narrowing down, your ABM campaign will be customised to each company. After all, they have different needs, and so your communication of what you may offer them will differ accordingly. But the targeting doesn’t end there — personalisation in an ABM campaign also extends to specific individuals within that organisation. Just like how companies differ, so do people — and so what you say to them may well be different, too.

Using our bank/SAB example above, a well-thought-out ABM strategy may isolate the key individuals in that organisation who will play a part in deciding whether or not to use the bank’s services. This may include the CFO, the CEO and the HR director — all of whom have different needs from the bank, whether it’s strategic financial guidance, compliance assistance or implementing a payroll system. In essence, there are multiple people in any large organisation who need specific problems solved, not just the CFO. Given this, the success of an ABM campaign is about how effectively you communicate how you’ll solve these different stakeholders’ problems.

Alignment between sales and marketing teams

One of the biggest strengths of an ABM campaign is that it’s 100% measurable. Since you’re marketing to a very select group of clients, you can measure exactly whether your prospects are responding or not. With this data, you can draw accurate metrics such as the cost per engagement, the value of the sale, and ROI once the sale is made.

This process is therefore very structured, which means there’s less uncertainty involved. It’s also a very close collaboration between the client and the agency throughout the creative process of designing the campaign, which is a hugely positive thing.

The blueprint of a typical ABM campaign

A typical ABM campaign would follow this general process:

The costs involved in an ABM campaign may make it seem like a huge investment for just one potential client. But landing that one client could make the ROI more than worth the time and effort involved. So, while the stakes may be higher with ABM marketing, the conversion rates are generally higher, too, making it a highly effective tactic for B2B marketers. 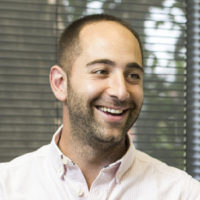 Warren Moss (@warrenmoss) is founder of Demographica, a full-service B2B and niche-market agency. He is also the chairman of the Direct Marketing Association of South Africa (DMASA) and the Assegai Integrated Marketing Awards (Assegais).

2 Responses to “Account-based marketing — the future of B2B sales?”