by Mandy de Waal (@mandyldewaal) What is the relationship between commerce and art? And why should advertisers, brand owners and marketers take notice of local art?

Jozi painter, Robyn Field, is in love with the “crazy beauty of being South African”. The fine artist, who is in residence at August House in the CBD, says of this “crazy beauty”: “It’s a highly charged time. I struggle to process a lot of what’s going on,” adding that her art offers her a way to reflect upon what’s happening in this country. “I prefer creating paintings to listening to political debates or reading opinion pieces, which can become like a long trip into the echo chamber,” she says.

Her work, recently on display at Julie Miller Investment Art Institute at the Mall of Africa in Midrand, reflects this and offers a lens for people to look through at South Africa and the world. One of her pieces — United Decisive Action — displays a haunting, apocalyptic scene in fulvous shades with black definition. This piece is a ‘beautiful’ portrait of a recently bombed Homs, Syria, that speaks to humanity losing the ability to discern, in an age of social interaction, overexposure and the distance created by the real and the perceived.

“At the moment, social media features conceptually and visually in some of my work because public discourse in 2016 has been so bizarre. A lot of the strangeness has to do with digital communication,” Field says. “People are struggling to get their heads around how we talk to each other right now,” she continues, explaining that the changing modes of communication, human behaviour and the “weirdness” of this all saturates her work.

Despite the subject matter being contemporary, Field’s chosen medium is traditional. There’s nothing digital in the media she uses in her creative process, which is charcoal on canvas, ink or layers and layers of paint. “It has been good fun and cathartic to get well away from screens and pixels. I use traditional materials as a form of personal meditation, I guess,” the artist adds.

This accords with Field’s view that, in an era of social media where everything is fleeting, she believes that people should think as deeply as possible about the social issues that affect them politically and personally. “Artists are reflective, and so is their art. We take time over a piece while we engage with the theme. I’d like to think the viewer is encouraged to engage in a similarly reflective way with the artwork and the issue it explores,” she says. According to Field, this is particularly relevant in SA, a country divided. The artist says that this binary has caused an environment where “unbridled judgements” run away with us. “We could all do with some reflection, even on issues we believe we fully understand and feel very strongly about.”

Field reflects upon the rise of political art and its popularity, and says that art informs society and reflects popular beliefs and the emotion of a particular passage in time. She says this is more prevalent of young and emerging artists who become an important barometer for society’s emotions. “Professional artists by and large paint for the market they have developed for themselves,” she says. “Once an artist has reached a certain level, much has been invested in them, and many people’s reputations and careers rely on their continued success. Often the work can become irrelevant as the commercial wheel revolves.”

What, then, is the relationship between commerce and art? “Commercial entities always try and use art to ‘sex’ up their brand, especially in the context of launch functions and viral marketing,” Field responds, adding: “Some big brands have substantial art collections, but these are largely investment opportunities. In all but the most exceptional circumstances, the art is irrelevant.” Field believes that fashion and trends dominate corporate art.

Why should advertisers, brand owners and marketers take notice of local art? “If you want to stay in touch with how local societies are evolving — something brands and their agencies need to do — it is much quicker, cheaper and more intellectually effective to look at what young artists are doing than to arrange focus groups or rely on trend reports,” she says.

Field has spent years on the Joburg arts scene, chiefly as owner and curator of Unity Gallery, 2003–2013. Through this CBD-based gallery, Field worked with emerging artists to develop their careers, founded craft and design projects and partnered with NGOs to help them hold exhibitions and promote young talent. In recent times, she’s been focusing upon her own work.

Some of her pieces

From Those Fabulous Folk Who Brought You Apartheid 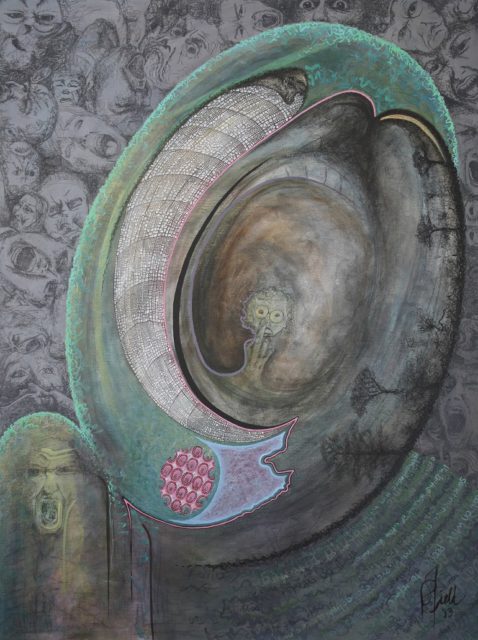 Inspired by the storm of (often violent) digital conversation sparked by an open letter to white people penned by social commentator, Gillian Schutte, this piece offers a snapshot of the emotional Zeitgeist of ‘702-land’. Screaming faces surround an African landscape vortex, which features the key aesthetic and political markers of the colonial spirit: an African bushveld devoid of Africans, traditional African fabrics and textures to be used in craft markets and clothing designs. The piece suggests that, for a lot of the time in South Africa, people are screaming in protest to save an Africa they have never actually been involved in, or understood. 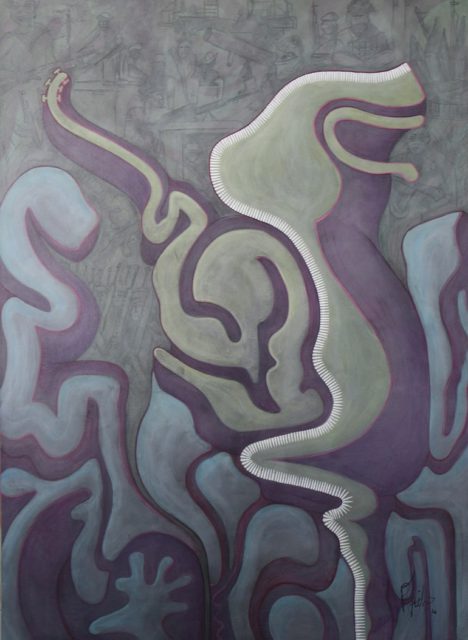 The Joburg creative scene is filled with a lot of peace-loving, friendly, creative people, among them quietly spoken rastafarians and others of a rasta sensibility. It may come as a surprise, then, for city visitors and people of the development and NGO mind-set to find out that many of these friendly creatives are also very militant about many matters, from the highly westernised nature of development programmes through to the land — how it was taken, and when it will be returned. This piece captures something of this dichotomy, which has a distinctly Pan-African feeling to it. The figure is gentle and smoky, but he exists within the context of routine violence, surrounded by the guns we associate with Africa, child soldiers, armies and roaming militants. Look closer, and you’ll see his outline consists of a string of bullets. 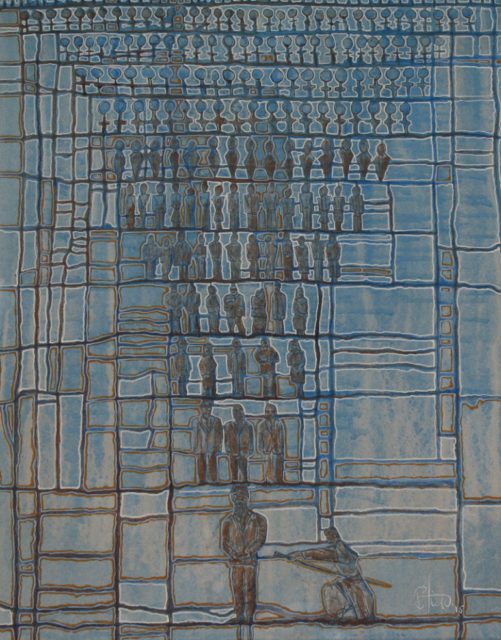 The cult of leadership has dire consequences, and yet across the world, belief in the hero leader (be that leader a CEO, a politician, an evangelist or philanthropist) has never been stronger. We ascribe all sorts of miraculous events to hero leaders, outcomes that really are the result of a far more-complex arrangement of circumstances and forces than we are willing or able to understand. Hero leaders seldom deliver hero results. Instead, the cult of the leader sees an inverted pyramid of vested interests surround the power. And then, when the leader is removed, as he or she eventually must be, chaos results. Dedicated to the (political) memory of Thabo Mbeki. 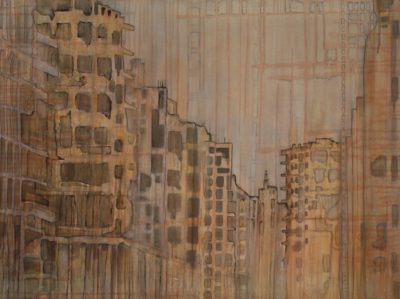 Take Your Shit and Go 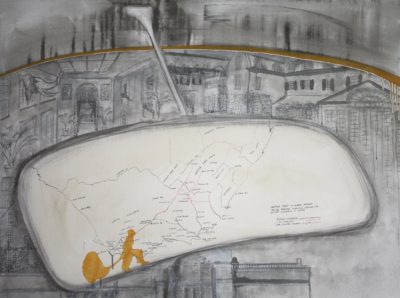 This piece explores the idea of Africa as currency — particularly for NGO types, Europeans, Americans, writers, artists and others who build careers upon the back of the idea of the dark continent and its development. The scene is rushing towards colonial opulence, a mansion rich with the treasures of conquest, from elephant heads to rare collectables. In the rear-view mirror, one of Joburg’s many recyclers drags the waste of upper-class life, pulled methodically from suburban garbage bins, to the depot to earn a scant living. The recycler marches across an early SA colonial landscape, one where the railway lines that facilitated the extraction of mining wealth from the country have barely been laid. The development of Africa, inclusive of the education and upliftment of the original inhabitants, has been a narrative trope for centuries. It has, indeed, formed the foundation of colonial and post-colonial economies. When all is said and done, however, the people who use this language are generally headed in a particular, self-serving direction. A direction which has surprisingly little to do with development, or the communities upon whose backs the protagonist’s career was built.

The Izikhotane phenomenon flickered strongly in the 2010–2014 years. It would see groups of young township residents battling against each other in the manner of a hip-hop or spoken word slam — but this time the contest was fashion and personal style and wealth. The protagonist with the fanciest clothes, the person able to demonstrate the greatest consumer opulence, would be the winner. Brands were king in this context. Shoes had to be Caravels or better. Custard had to be Ultra Mel. A battler would, for example, throw his or her Ultra Mel to the winds, to demonstrate just how little such a luxury item meant to them. Cash, equally, was sometimes burned (when the fad was at its height). The scene was infused with tragedy, as participants almost always came from poverty stricken backgrounds and were borrowing money from parents and grandparents to compete. This piece was born when a friend sent an SMS reading: “You won’t believe it, but there is actually Ultra Mel landing on my lounge window right now, as I type…” 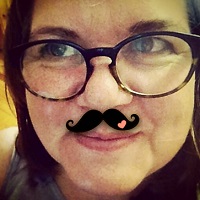 Mandy de Waal (now known as Charlie Mathews) is a writer based in KwaZulu-Natal, South Africa, as well as contributing editor to MarkLives.com through her monthly “Africa Dispatches” column.