#OpenAfrica: Poverty in a rising Africa

an #OpenAfricaMag feature by Kathleen Beegle, Luc Christiaensen, Andrew Dabalen and Isis Gaddis. Africa experienced robust economic growth over the past two decades, growing at an average annual rate of 4.5%. Did this growth lead to substantial improvements in well-being? Did household income rise and poverty fall? Did other dimensions of well-being, including education, health, physical security, and self-determination, improve? Did all countries and population groups benefit equally, or did progress come at the expense of rising inequality? 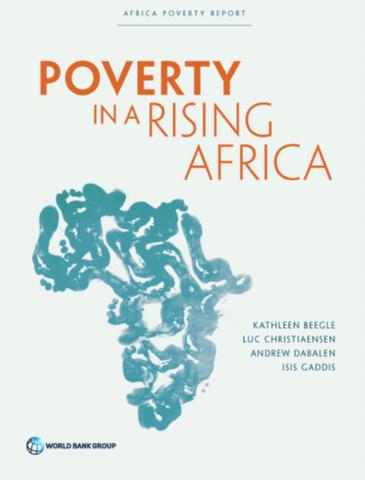 The answers have been unclear, in part because poverty data on Africa are weak. This report reviews the evidence and provides a unique analysis of the underlying data. It is the first of a two-part volume on poverty in Africa (the second report will explore how to accelerate poverty reduction in the region).

Poverty data on Africa are weak and need strengthening

Comparable, good-quality household consumption surveys conducted at regular intervals are the building blocks for measuring monetary poverty and inequality. Tracking poverty in Africa is difficult because the data are deficient on all three counts.

The quality of many of these surveys is low, and often the surveys are not comparable. One survey of Nigeria’s poverty rate in 2010 estimated the figure at 26%; another, conducted the same year, put the figure at 53%. With 20% of Africa’s population in Nigeria, this discrepancy makes a big difference in tracking trends in the region. Other data needed to estimate poverty trends (such as data on price changes, which are used to convert consumption values to the benchmark year of the global poverty line) also face critical deficiencies.

Insufficient funding and low capacity only partly explain the weakness of poverty statistics in Africa. Prevailing political arrangements often favour less (or less autonomous) funding for statistics. In some countries donor financing has replaced domestic financing, but the interests of donors are not always aligned with the interests of governments. Alternative financing models are needed. Regional cooperation and peer learning, as well as clearer international standards for poverty measurement, could help improve technical quality and consistency.

Better data can lead to better decisions and better lives. The Program for the Improvement of Surveys and the Measurement of Living Conditions in Latin America and the Caribbean (known by its acronym in Spanish, MECOVI) provides a compelling model for achieving better poverty data. 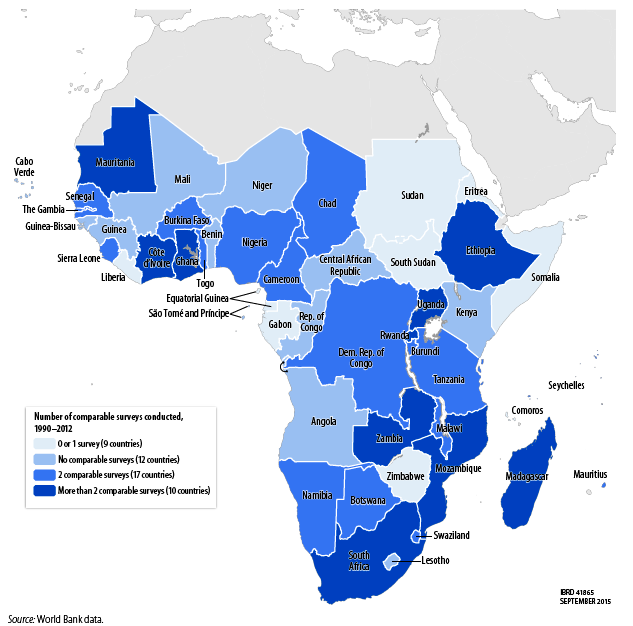 Poverty in Africa may be lower than current estimates suggest, but more people are poor today than in 1990

According to World Bank estimates from household surveys, the share of people in Africa living on less than $1.90 a day fell from 56% in 1990 to 43% in 2012. Limiting the estimation to comparable surveys of good quality, drawing on information from non-consumption surveys, and applying price deflators other than the consumer price index suggest that poverty may have declined by more. Even under the most optimistic alternative scenario, however, there were many more poor people in Africa in 2012 than in 1990 (more than 330m, up from about 280m), as a result of rapid population growth.

Africa will not meet the Millennium Development Goal target of halving poverty by 2015 and projections are that the world’s poor will be increasingly concentrated in Africa. Fragility and conflict are especially detrimental to poverty reduction, resulting in poverty reduction that was 15%age points lower than in other economies over the 1996–2012 period. Rural areas remain much poorer than urban areas, although the gap narrowed. The poverty rate among female-headed households is lower than among male-headed households, but households headed by widows are worse off (and these results may change once differences in demographic composition are taken into account). Poverty is a persistent condition for many poor, with about half of the poor chronically poor.

Non-monetary dimensions of well-being improved, but levels remain low and progress has levelled off

By many dimensions, well-being in Africa improved between 1995 and 2012. Adult literacy rates increased 4 percentage points. Life expectancy at birth rose 6.2 years, and the prevalence of chronic malnutrition among children under 5 fell 6 percentage points. The number of deaths from politically motivated violence declined, and both tolerance and the incidence of gender-based domestic violence dropped. Scores on voice and accountability indicators rose slightly, and there was a trend toward greater participation of women in household decision-making processes.

These improvements notwithstanding, the levels of achievement remain low across these domains, and the rate of progress is levelling off. Despite the increase in school enrollment, more than two out of five adults are still unable to read or write, and the quality of education is very low. About three-quarters of sixth graders in Malawi and Zambia cannot read for meaning, providing just one example of the school quality challenge. The need to reinvigorate efforts to tackle Africa’s basic educational challenge and build Africa’s future human capital is urgent.

Health outcomes mirror the results for literacy: Progress is occurring, but outcomes remain the worst in the world. Nearly two in five children are malnourished, and progress in immunisation rates and bednet distribution is slowing. Africans enjoyed considerably more peace in the 2000s than they did in earlier decades, but the number of violent events has been on the rise since 2010, reaching four times the level of the mid-1990s.

Tolerance of domestic violence (at 30% of the population) is still twice as high as in the rest of the developing world. Greater tolerance of domestic violence and less empowered decision making among younger (compared with older) women suggest that a generational shift in mindset is still to come. Africa also remains among the bottom performers in terms of voice and accountability.

Beyond these region-wide trends, four findings stand out: 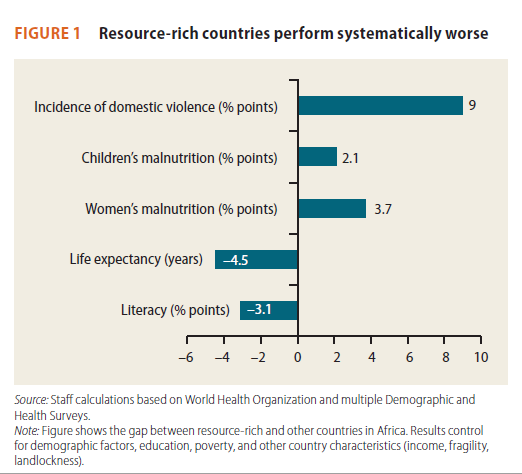 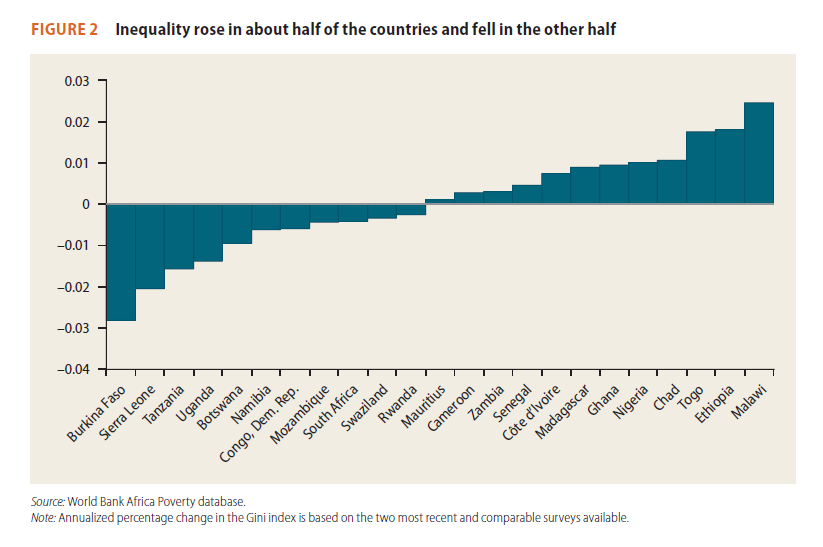 Inequality patterns vary across the region

Of the 10 most unequal countries in the world today, seven are in Africa. But excluding these countries (all of which are in southern Africa and five of which have populations of less than 5m) and controlling for country-level income, Africa appears to have inequality levels comparable to developing countries in other parts of the world.

Despite Africa’s double decade of growth and the important role natural resources played in that growth, there is no evidence of a systematic increase in inequality within countries in the region: For the set of countries for which inequality trends can be measured, inequality increased in about half and decreased in about half (figure 2). But household surveys fail to capture high net worth individuals, whose numbers and wealth have increased. For the region as a whole, the share of inequality attributed to between-country differences is growing, meaning there is a growing divide between countries.

Spatial inequalities (urban-rural differences and differences across regions) account for a large share of overall inequality in many countries. Intergenerational mobility in education and occupation have improved, but mobility is still low, which perpetuates inequality. 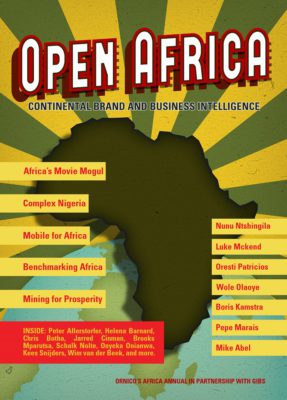 The pdf of the final, full-length book, once published, should be available at openknowledge.worldbank.org and print copies ordered at Amazon.

This feature first ran in Open Africa, the definitive guide to business, branding and marketing in Africa, brought to you by Ornico in partnership with GIBS Business School, with MarkLives.com as its official media partner. Download the entire publication free of charge (registration required).