by Charlie Stewart (@CStewart_ZA) Several weeks back, I overheard some of my colleagues debating whether winky faces are set to replace keywords as a means of targeting consumers. My immediate reaction was probably akin to Bill Gates’ infamous 1981 pronouncement that 640k ought to be enough for anybody. Emojis … really? There’s no way they’ll be a substitute for carefully crafted copy.

But Twitter sees it differently. Back in June 2016, Neil Shah, one of its advertising product managers, announced that advertisers are now able to target people who’ve recently tweeted or engaged with tweets featuring smileys on their platform.

A new feature, Twitter’s algorithm uses emoji activity as a signal of a person’s mood or mindset, enabling brands to connect with people based upon their expressed sentiment. For example, a takeaway franchise could target people who’ve tweeted food icons such as pizza, while a tour operator might flight ads to people who’ve shared posts with images of beach umbrellas and cocktails.

I guess an emergency plumber could even try to own the popular poop emoji, not that this was one of the suggestions in Twitter’s official blog post offering guidance on the ways brands may increase tweet engagements with emojis.

Several months prior to the Twitter announcement, Facebook launched its Reactions icons. Ostensibly, these were targeted at end users, allowing them to express far more sentiment than the old ‘like’ permitted. But, for advertisers, Reactions create the potential for gaining better insight into audience perceptions of their content and, by extension, deliver an opportunity to segment future advertising campaigns, sending different messages to people based upon their sentiment.

Years ago, in a pre-digital world, I remember standing in a pub bathroom looking at a urinal mat promoting a taxi company, thinking that advertising really had plummeted to new depths in its attempts to infiltrate our lives.

While the internet’s created many more means — some of them infuriating — for brands to disrupt our daily routines, the more I think about it, the more I like the concept of emoji marketing. Images have always been a great aid to storytelling, and emojis have been a boon for people who prefer to communicate with pictures rather than words; the exploding-face image my 15-year-old daughter sent me last night after I threatened to ground her said far more about her state of mind than any words could have conveyed.

Hours before his marriage in April last year, tennis player Andy Murray tweeted a string of emojis that represented his plans for his big day. Had Twitter’s ad-serving platform been ready, I could easily see a host of brands leveraging his fame to run guerrilla campaigns, targeting the 13 000 people who retweeted his message, with ads ranging from flower delivery to honeymoon destinations. 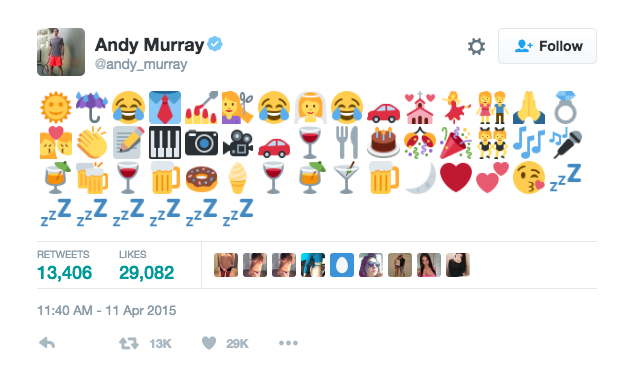 In a world where brands battle to grab our attention for more than a couple of seconds, an image – especially one that conveys emotion — can create a level of engagement that few other marketing messages can achieve.

A couple of year ago, Bud Light used emojis to create the US flag in celebration of Independence Day. The message was liked 108 000 times and generated nearly 150 000 retweets, creating more engagement than its social campaigns around Super Bowl.

Charlie Stewart (@CStewart_ZA) is CEO of Rogerwilco, a multi-award-winning independent digital agency best known for its expertise with Drupal, SEO and content marketing. A Scot by birth, he moved to South Africa in the early 2000s in his quest to support a winning rugby team — a search he’s reluctantly forsaken. Together with Mark Eardley, he co-authored Business to Business Marketing: A Step by Step Guide, (Penguin Random House, 2016) and may be found on LinkedIn. Charlie contributes the monthly “Clicks ‘n Tricks” column, which looks at how brands are using digital channels to engage their customers, to MarkLives.