Motive: Technology — the death of storytelling?

by Charlie Stewart (@CStewart_ZA) A few years ago, a new piece of jargon entered our lexicon; “content marketing” hit the mainstream and nowhere more so than in the business-to-business space. To corporates and agencies, it was a silver bullet — a guaranteed way of cultivating prospects and nudging them along the sales pipeline.

The outcome was inevitable: a deluge of unedifying, turgid rubbish that serves neither brand nor customer.

Start of the revolution

The revolution started when a bunch of bearded guys in skinny jeans started to talk about storytelling using the same hushed, revered tones David Attenborough reserves for the discovery of a new species. Using content is a great way to impart a message and engage an audience, they told us.

What they missed was that content has always been a key element of a structured marketing programme. White papers, research reports, articles and press releases have been around for ages. And our Stone Age ancestors were pretty handy at knocking out the odd cave wall meme.

But someone decided thought-leadership needed to be ‘sexed up’ and rebranded as content marketing.

The rebrand was phenomenally successful. According to the Content Marketing Institute’s 2016 North American B2B content marketing study, companies spend 28% of their total marketing budget on content generation and placement. Despite this, just 30% feel it delivers effective results. And, in a twist that would be funny if it weren’t so scary, despite their self-acknowledged failure, over half of them are planning to increase their content spend in 2017.

Late last year at Content Marketing World, the annual pilgrimage for content marketers, Joe Pulizzi produced an image of Gartner’s Hype Cycle indicating that content marketing had moved into the trough of disillusionment. He was alluding to the fact that, as more businesses jump into content marketing, the chances of them finding success decline, leading to a general sense of dissatisfaction with the tactic.

In a witty post conference writeup, Doug Kessler from Velocity Partners reckoned that content marketing had hit “the orange spot of ‘oh shit’” on Gartner’s chart. Which got me thinking about the proliferation of awful content on the internet. 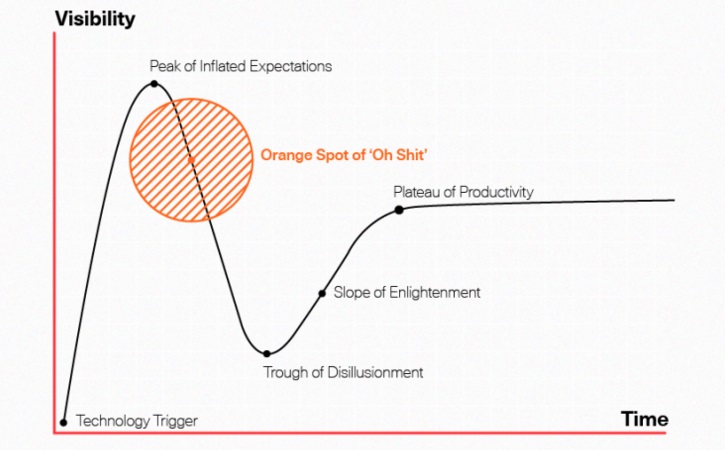 The more I researched the volume of rubbish that’s being produced by companies and consumers alike, the more it dawned upon me that the problem’s not so much about the content (although it’s indisputable that much of it is really, really crappy). And it’s not entirely due to humankind’s Warholian craving for 15 minutes of fame, although that’s certainly a factor. It’s actually about technology: sadly, by making it easier to produce and publish, technology’s killing content.

That’s probably what the quill-wielding monks felt when Johannes Gutenberg introduced his printing press in the 1440s.

Back then, it took an age to produce a decent piece of content. Heck, the greatest Western playwright of all time took 24 years to write 884 421 brilliant words.

A few years ago, the BBC reported that a US-based programmer, Jesse Anderson, used Amazon’s cloud-computing service to emulate the effect of apes sitting at a typewriter. With his software set to type characters at random, he was able to reproduce Shakespeare’s entire works, in sequence, in just over a month.

Another anecdote with a less-alarming but more-predictable outcome is that, in 2003, Paignton Zoo in England carried out a practical test by putting a keyboard connected to a PC into the cage of six crested macaques. After a month, the monkeys had produced five pages of the letter “S”. They had also crapped on, and then broken, the keyboard.

In the time it’s taken you to read this, around 350 000 tweets have been sent. At 10 words a tweet, that’s roughly four times the Good Bard’s lifetime output. In one minute. Add that to the insane cascade of user-generated content (around 500 hours of video are uploaded to YouTube and some 4m pieces of Facebook content are shared every minute) and you arrive at a horrifyingly awful scenario.

We’re drowning in it: content is spreading like Japanese knotweed, slowly suffocating the life out of us.

And it’s happened because technology’s made it too damned easy for us to write, design, shoot and publish. By taking the artisanship out of content creation, technology’s given a voice to people who have little to say. In their haste to reach the market, all too many content producers have forgotten the fundamentals of storytelling. They’ve ceased to think, to question and to validate. They’ve stopped being relevant.

Much B2B content is couched in the awkward terminology of the boardroom, not the language of the customer. It lacks authenticity. And this is obvious to the end audience. The inevitability is that content marketers — even the good ones — are seeing engagement drop; there’s less traffic to their websites, fewer leads and less-attributable revenue.

There’s little we can do to stop the advance of technology. Frankly, we should be embracing it because at some point it’ll understand our individual preferences sufficiently to take moderation and endorsement to the point at which it can filter what we want from what we don’t. But, until that day dawns, we need to get back to basics if we want our content to stand out. And that means rediscovering the art of storytelling.

Why did our grandmothers’ tales captivate us as children? Because they were relevant and relatable. Why did the skinny oke with a beard and a robe have his peers hanging on his every word a couple of thousand years ago? Because he saw their needs and translated his message into a language they could understand.

So the next time a client says they want an infographic or a video, do humankind a favour. Stop them and ask: “Why?” 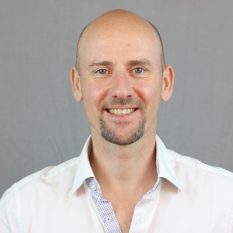