by Thabang Leshilo (@Thabang_Leshilo) The rise of digital in Africa has many commercial implications for those doing business on the continent: faster dissemination of information, cost-effective marketing spend and greater reach, for example. However, few appear to have explored how digital is influencing culture. As much as young Africans are living in a global world, there is a digital culture that is slowly beginning to take shape, with a uniquely African expression.

According to the University of the Witwatersrand (Wits), the concept of a ‘digital technology hub’ is familiar to many living in the US and Europe. Almost every city has a district, road, building, neighbourhood or precinct where people gather to learn, work and innovate. London has Silicon Roundabout in Shoreditch and Boston has Kendall Square. In Africa, Nairobi has its iHub and, in 2014, Africa’s most-important economic centre, Johannesburg, began its journey with an exciting new-age software skills and innovation hub located in Braamfontein, called the Tshimologong Precinct.

Home to the headquarters of many multinationals operating in Africa, Joburg is one of the continent’s fastest-growing metropolitan areas. Tens of thousands of young, ambitious, innovative and entrepreneurial Africans flock to the city in search of opportunity. Many have settled in Braamfontein, the an inner-city area close to Wits, Nelson Mandela’s alma mater and one of Africa’s top research-intensive universities.

In creating the hub, it  aims to grow skills, create jobs, encourage the establishment of new businesses and promote the regeneration of Johannesburg’s inner-city area. This is not only to benefit the university’s own students, but to become the focal point for digital innovation for all of Johannesburg’s citizens, young and old, employed and unemployed, South African and other Africans.

Promoting a culture of digital innovation

To promote this culture of innovation, creative and technical development, initiatives such as the Fak’ugesi, the African Digital Innovation Festival which takes place in Braamfontein over August and September, are encouraged. Fak’ugesi coordinates and curates a number of standalone conferences, exhibitions, workshops, short-courses and other activities in the inner city of Johannesburg to promote the fusion of creative and technical development in Africa.

Another initiative is that from A MAZE, a Berlin-based international interdisciplinary and game-centred brand that has participated in Fak’ugesi for four years. This year, however, for the first time it truly promoted digital in Africa with its own popup events that took the pick of African and international independent games and playful media to Soweto and Alexander.

While the concept of digital technology hubs is still very niche here, what we are seeing among young people is a cultural movement and an artistic expression that is uniquely African, being born out of the digital world.

The real influence of digital in art and culture

Young Africans are no longer just on the receiving end of information; they are creating and sharing their experiences with the rest world. Not only that but, for the first time, there is a wealth of information and exposure to other happenings on our continent – a gateway into other African countries and cultures that will hopefully serve to facilitate greater unity among all of us.

Nahema Marchal of Okay Africa acknowledges that today, countless projects are breaking social, geographical and infrastructural borders by redefining what is means to be a citizen, an advocate, an artist or a writer in the digital age.

2012 saw the launch of Badilisha Poetry X-change, the first and largest digital archive of pan-African poetry in the world. Keeping up with Africa’s rich tradition of oral poetry, the site — accessible via mobile phones — serves as a platform for poets to showcase their work in both written and “radio” format.

Experimenting with digital tech for years

Marchal notes how contemporary African artists have been experimenting with digital tech for many years. Collage artist, Nkiru Oparah, uses the digital space to reclaim, subvert or refashion typical representations of Africa, often by superposing ethnographic documents and digital imagery. Others, such as Nolan Dennis or Bogosi Sekhukhuni, focus on animation as a new channel of storytelling that can playfully challenge conventions about how and from where information about Africa comes.

The explosive electronic music scene in SA is another example of how young people have given rise to a new style and genre of music through digital. Cape Town rapper, Petite Noir, tells the story of the duality that so often defines Africa in the digital effects used in the creation of his latest music video.

As resources become more readily available, we should see young Africans creating for the unique needs of this market that might very well be applicable in other markets, too. I believe that, in the next 5–10 years, it will not be about replicating what comes out of Europe or America, but innovating with a uniquely African mind-set.

What this means for business in the future

With greater exposure to digital innovation, a younger generation of job seekers and consumers will expect business and brands to adopt a stronger culture of innovation. There will be no excuse for big, slow-moving corporate giants to not have innovation hubs themselves, or to somehow contribute to this emergent cultural movement.

To get ahead now, do not only look to global innovations for inspiration — look to young digital creatives as they are beginning to define innovation for Africa on their own terms. 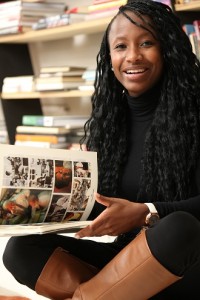