by Martin MacGregor (@MartMacG) Our household received something which really caught my eye the other day. It was a simple single page from Pick n Pay Smart Shopper, with pictures of 10 products, all appealingly discounted. What was special about it? The 10 items were exactly the brands and formats which we used the most, and recognition was immediate.

This felt like the perfect example of the right kind of data analysis translated into an effective and relevant execution. Transactional data is by far the best guide of consumer intent, as no decision is more real than purchase. 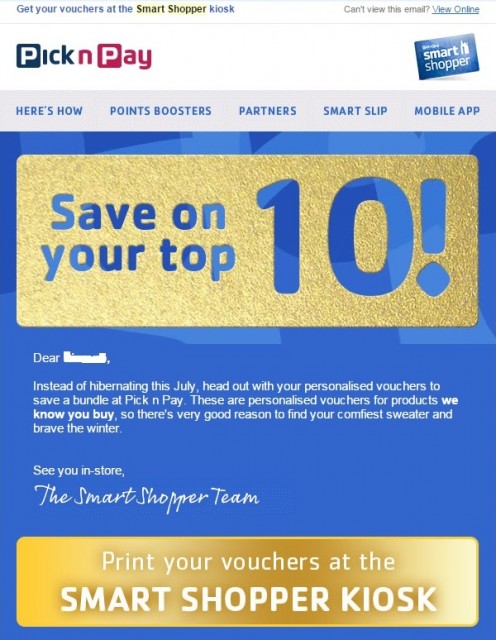 Media decisions, though, are required to be made in a much broader part of the funnel, with data that is much less certain of itself. This gap has always bothered media planners and their clients, and it’s no surprise that technology has fuelled a massive shift to making this data more predictive.

Programmatic buying is now all the rage and the race is on to broaden it outside of digital into all media. This is definitely the age of the algorithm, and every communication company is setting up labs filled with mathematicians and analysts building models that try and predict the best possible response for brand communication.

Parallel to this, social media platforms are increasingly “suggesting” what and who you might like, gently and overtly prodding and pushing content into your stream. The news itself is becoming fluid and starting to fashion itself around the kind of news that you might like. You may think you’re now an editor — but the algorithm’s already doing it for you.

In the media industry I have seen two reactions:

The result has been little confidence from marketers in their digital media investment, and lots of gnashing of teeth from industry.

What has been missing is the sane middle-ground.

There can be absolutely no doubt that data properly harnessed, interrogated, analysed and understood is a massively exciting tool which may help direct message and touchpoint selection in a way that has not been possible before. It is inconceivable for anyone in the communications industry not to be excited by this.

At the same time, what the programme throws up will always require human context and assumption to elevate it to a truly meaningful insight and execution which maximises impact. The orchestra is nothing but a whole lot of sounds without the conductor to bring the coherent magic out of all the parts.

The Pick n Pay example I used earlier I called effective and relevant — great data analysis elevated into an impactful execution. The more we work with data, the more opportunities will open up to really effect consumer behaviour. The power of the conscious algorithm is immense.