Ad of the Week: Fighting apathy with empathy

by Oresti Patricios (@orestaki) This week I am nominating a digital/social media campaign for #AdoftheWeek. It’s called “Get Me to 21” and it’s an unusual concept in terms of marketing and publicity. The appeal is for organ donors to sign up, because Jenna Lowe needs lung-replacement surgery, and there are currently no donors available.

Yes, it’s a good cause, and what makes it special is not just the way in which the campaign is centred on a smart, young girl; while her face personalises the plight of people awaiting replacement organs, this campaign is about much more than this.

On the home page of microsite www.getmeto21.com, we are greeted first by a video of Lowe, talking directly to camera. She has an oxygen line under her nose, she seems to have a little trouble breathing, yet she is upbeat and engaging. She tells us she is 19, and she’s planning her 21st birthday party.

The basic message is that she’s inviting you to the party (whomever you are), if you sign up for organ donation. She finishes off by saying, simply and without pathos, “Because, in order to make it to 21, I’m going to need new lungs.” 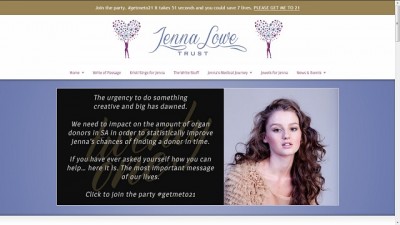 When I heard about the campaign, I was prepared for a message that tugged at the heart strings, that manipulated my emotions with a bit of guilt. But it does none of that. Yes, it’s a message that gets you in the gut, but it’s presented without sentimentality.

The result is decreased oxygen in the blood, and enlargement of the heart due to the increased strain of pumping blood through the lungs.

While the severity of cases may vary, in Lowe’s case the choices are limited. Medical treatments are palliative, but in the long run she will need a lung transplant.

In South Africa, the number of donors is limited: the Organ Donor Foundation of SA (www.odf.org.za) says it needs 50 000 people to sign on as donors to meet the current needs, as there are some 4 300 people waiting for organ donations of one sort or another.

This year, signatures were being added at the rate of about 1 500 per month, for the first part of the year, and then showed an increase from July, with 5 727 new signups in October. On Lowe’s site, almost 3 000 people have signed up through a form on the site, a figure that keeps climbing — it clicked over a few notches while I wrote this — and may well have passed the 3 000 mark by the time you read this. 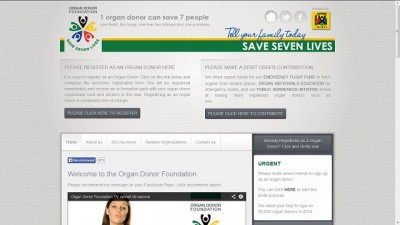 The hashtag #getmeto21 has been something of a viral hit on Twitter. Another hashtag that the Organ Donor Foundation has been using is #save7 — which refers to the fact that up to seven lives may be saved or assisted by one donation.

Lowe has proven herself to be a real dynamo, despite the debilitating effects of the disease. She earned seven distinctions in matric last year, and was deputy head girl of her school. On Monday, she was selected as Lead SA’s youth hero, and she has continued to campaign for awareness of her condition and the plight of people awaiting organ donations.

Together with her younger sister Kristi, Lowe wrote a song to try and raise awareness of her condition and funds for her medication. Teaming up with local band Good Luck, they produced a single called “I Need More Time”, which went to number 3 on the iTunes SA download chart in one day. For more, go to www.jennalowe.co.za.

So who’s behind it all?

Lowe + Partners Cape Town’s talented team, led by Kirk Gainsford, originally came up with the idea for the campaign on behalf of the client — in this case, the Lowe family [the sharing of the name is merely a coincidence — ed-at-large], who seems to have been involved in branding, design and storytelling, both commercially and relating to causes — and Sascha Ruppert and his team at GSDH conceptualised the microsite and built it. Egg Films assisted with the video production.

Lowe + Partners CT is also the agency for the Organ Donor Foundation.

It’s a powerful lesson of how a group of people can make a difference, if you understand how to use media, design and branding.

Using the low-cost tools of social media, Lowe and her team have managed to create a campaign that has made an important impact on people’s lives, and one that will be with us for a while. The thinking is smart and well-executed; the message is profoundly engaging; and the effort appears to have created a forward volition with momentum.

All hail to Jenna Lowe and her team — may they go on with strength.