Live from Qunu – reporting from the funeral of Nelson Mandela

by Gill Moodie (@grubstreetSA) Three journalists:  all East Londoners and deeply connected to the Daily Dispatch, the hometown newspaper of Nelson Mandela. All three covered THE once-in-a-lifetime story: the funeral of Mandela in Qunu in the Transkei last year but with totally different world views and media experience.

The three – Andrew Stone, the Dispatch’s metro editor; Sibongile Mkani-Mpolweni, who cut her teeth as a reporter at the 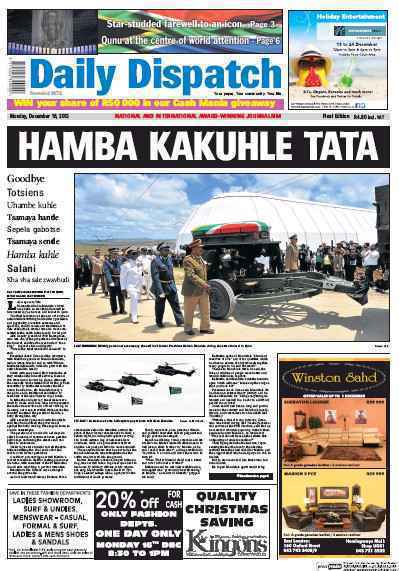 Dispatch and now a reporter for eNCA TV news channel in Johannesburg; and Andrew Austin, once the Dispatch news editor who is now the editor of the Hawke’s Bay Today newspaper in New Zealand – told Grubstreet what it was like to cover the biggest story on the planet in their home patch.

Stone headed to the Dispatch base camp in a secondary school close to Mandela’s Qunu home (prearranged with the school’s principal) the night Mandela’s death was announced. With the exception of a trip back to East London to get supplies, he was there for the entire 10 days’ mourning period with a team of other Dispatch reporters, including the paper’s deputy editor, Brett Horner.

“I was on the ground by about 8am (the next morning) and they were still setting up the (security) cordon around Qunu,” Stone told Grubstreet.

Initially, there were few journalists from other news organisations in the area. “It was weird. Qunu was completely ignored in the beginning and then as it got closer to Mandela being flown down, there was this massive build-up of journalists and the police and the army.

“I was quite surprised by a lack of interest from the (Qunu) locals. People just got on with lives. We wondered if it was because of poverty – that day-to-day survival was more important than anything else… And on the day of the funeral, I really expected the area to fill up but at the one public viewing centre, when we got there, the journalists outnumbered the villagers by about two to one.”

As it got closer to the funeral, some journalists were excluded from the area even though they had arranged accommodation with locals. The Dispatch, however, was left where it was.

“During that week (before the funeral), we were visited by everyone – government officials, Icasa, the army, police, you name it,” says Stone. “They all looked around and then one of the officials at a press conference said something along the lines of: ‘We know about those journalists on the hill in the school but they don’t have a significant advantage’. And I think that’s why we were left to stay there. We were a stone’s throw away from the boundary wall (of Mandela’s home) but we couldn’t actually see into the house.

“In hindsight, we could have arranged a better place. There were no ablutions or running water. You had to walk to the long drop… We had electricity in parts (of the school) but of about 10 classrooms, only three or four were really usable.  It was a bit of eye-opener for all of us to see this is what kids are being taught in.

“You know, I was glad when it was all over and living like that for over a week was tough,” Stone says. “But I’m stoked I was part of it. I wouldn’t have wanted it any other way… It was our backyard and we didn’t want to be out-reported in our backyard. And it was big story for our readers.”

Because of the security clampdown, the only option left for reporters inside the security cordon was to interview the locals, Stone says. “In part, the Dispatch was pretty lucky as we already had contacts. Some of our reporters knew the royal families so we managed to get a better mix of stories but I felt sorry for the foreign journalists.”

eNCA’s Mkani-Mpolweni  agrees that the security clampdown  made covering the funeral  very difficult. “I wanted to interview the Qunu chief, who is a woman,” she told Grubstreet. “She stays opposite Mandela’s house but when were in the house talking to her, the police came in to say that we had to leave, we couldn’t do interviews…  We said to them they couldn’t do this as it was her house but, in the end, we had to go. Neither her nor us had any choice.

“Qunu was frustrating for us journalists – and for the residents as well. There were always cops around.

“We spoke mostly to the residents and they told us mostly of their memories of Mandela. Some told us Mandela was not theirs in the end because they saw the hearse coming and it just drove past them. They didn’t get to see him whereas in Pretoria, people got to view the body.

“They wanted to go the house and be at the funeral, says Mkani-Mpolweni says, “but very few Qunu people were invited so on the day they went about their lives in their homes, washing and cooking.  ‘Why must we go watch it on TV as if we are in Jo’burg?’ they are told us. ‘For us, this is not happening’.

“I don’t know what I expected (of the story)… but I was pleased with what we were able to produce. ”

For Austin, being put on an aeroplane to fly right around the world to the Eastern Cape was an unexpected turn of events.

“I was in my office in the newspaper that I edit in Hawke’s Bay when the news came over the agency wires that Mandela had died. Months before, I had pre-written an obituary for the newspapers in my group, APN, including the biggest paper, The New Zealand Herald. It was a case of dusting it off and sending it on.

“The feature, about my impressions and experiences of Mandela, was published on the Saturday after his death and it set off a chain of events that led me home,” he told Grubstreet in an email. “The editor of the NZ Herald, Shayne Currie, phoned me on Saturday afternoon to ask me if I would like to go to South Africa. By the Monday morning (New Zealand time) I was on a plane to Johannesburg via Singapore.

“It was the start of a seven-day whirlwind. My brief was quite unusual because I was not there to cover the hard news, as my newspapers could get that from the wire services. ‘Don’t be afraid to put yourself in the story,’ NZ Herald editor-in-chief Tim Murphy told me before I left. The newspapers wanted my personal insights, the comparisons between now and when I was last there and, most of all, the emotion – of the country and from me.

“Make no mistake; it was a tough assignment logistically. With New Zealand being 10 hours ahead of South Africa, I got into a routine of filing in the morning (SA Time) to meet the evening deadlines for the following day’s paper and then filing in the evening (SA Time) to meet deadlines for the websites in the morning in New Zealand. I slept for three hours a night, fell asleep at a traffic light for a few seconds and even managed to do a radio interview at 3am (SA time) with a station in New Zealand.

“As the week went on, I had to turn my attention to big reads for the weekend papers – a 2 000-word piece for the Saturday paper, the Weekend Herald, on how the country had changed since I was last there and a 1 000-word piece on my identity crisis – a South African living in New Zealand – for the Herald on Sunday. Seventeen stories, for online and print, were filed in total.

“Because I was late in arriving, I only got my accreditation on the Tuesday night. Although I had filed a few stories by then already, work began in earnest the next day in Pretoria where Mandela lay in state. I took the simple philosophy that I would talk to as many people as possible to build up a picture of what Mandela meant to them and also their hopes and fears for the future.

“The great thing about the assignment was that almost anything was part of the story because it was about my reaction to events and South Africa as a whole. As the New Zealand Prime Minister John Key was also in town, there was an expectation to get something from him as well, so it made for a busy time.

“The moment it all hit for me was when I was standing in the grounds of the Union Buildings and I became quite emotional. It set the tone for the rest of the trip. I had a story to tell and I needed to get over my hard-news instincts and tell it with emotion and passion.

“But the best part of the trip for me was when I travelled back to my home province – the Eastern Cape. I was born in Port Elizabeth and grew up in East London. My first job – the one that formed me as a journalist – was at the Daily Dispatch. This was my patch and I felt very comfortable as I drove into the Transkei on the Saturday morning (the day before Mandela’s funeral).

“Having been the assigning editor on many an assignment over the years, I was in the unusual situation of being on the other side of the desk but it meant I knew what was expected of me.

“With limited access to WiFi, things were difficult out in the field. Standing at a roadblock waiting for Mandela’s body to arrive home, my main job became tweeting what I saw. Because it was night in New Zealand, it meant that New Zealanders were waking up to my tweets, which were being retweeted by the New Zealand Herald, a substantial newspaper with a larger readership than most in South Africa. I was the only New Zealand journalist in Qunu so I felt it was important to inform the readers.

“The next two days were quite an amazing experience and made me appreciate the country of my birth. I felt privileged to be able to share what I was experiencing with my adopted land. By all accounts, my assigning editors and the readers were happy with the service I provided.

“It was not without its trials and tribulations but this is one assignment I would not have missed for the world.”